Londoners! It has come to my attention that our candidates for the office of the mayor are all entirely unacceptable: Boris Johnson has entirely forgotten about his bold Bus-destroying agenda of 2008, Ken has pledged to take out just 8 of the big red monstrosities and if we’re honest none of the others actually matter.

Because of this, i pledge that a vote for me will be a vote to DESTROY ALL BUSES. Not just the big double decker ones or the piddly little ones they send round to the dodgier estates, but EVERY LAST BUS. Some may accuse me of being a single issue candidate, but this isn’t true. I would also like to repaint the entire city so that everything matches a uniform 15 colour palette, like this: 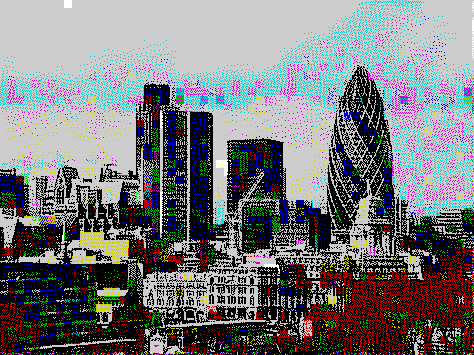 Now, I know what you’re thinking: “Wonderful Policies Mr Fatnick, but you aren’t even on the ballot paper!”

Well, I’ve been doing the sums and i can tell you that, despite this fact, my chances of being the next mayor are still higher than Jenny Jones’.

This is a watertight plan. Come on everyone – get out there and put Fatnick on your ballot paper! Lets reclaim this city for the bus-skeptic ZX Spectrum fans.

If you put Fatnick on your ballotpaper, dont forget to post a picture in the comments so i can send you a little something in return.