A weird gig in many ways. Would many people turn up to see a partial PIL line up play a bastardised version of a 30 year old album? Yes, apparently they would: when we rocked up at the village underground, the que was round the block and veering into the main road. Impressive.

The venue itself was commendable. nice space, decent temperature, friendly staff who don’t mind you buying a pint in loose change, and perfect lighting and acoustics.

But the performance…wow. Bands like PIL don’t tend to get. back together very often, so having 2 of the original line up just play through the original album would have been enough. In fact, that was arguably the danger here: if Metal Box is an album many of us have listened to on repeat, how could you hope to improve it?

But improve it they did, with a number of twisted and elongated arrangements that, though stretched, never out-stayed their welcome. Wobble’s bass, so powerful and prominent on the album, managed to be as powerful as you’d expect but always melodic and it never smothered the lighter tones. Levine’s scratchy notes floated over the top, and it was a real joy to be able to see just how he creates those strange, barely concordant tones. Potentially a gimmick, the horn was worked expertly into the mix: as an A Certain Ratio fan, a number of tracks felt like a number of favourite tracks had somehow managed to cross pollinate. Finally, the drummer and the expert Lyndon impersonator slotted in perfectly to complete the ensemble, being mainly unobtrusive but adding a bit of flair when the situation demanded.

Overall then, a great gig: somehow winding nostalgia seamlessly with something fresher and more exciting. Music needs more artists like Levine and Wobble. 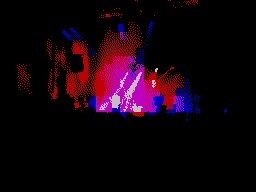