El Reg have written a retrospective on one of my favourite Speccy Games, Ghostbusters: 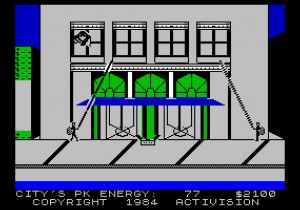 Considering I was late onto the Speccy scene, arriving at a time there were many more technically impressive games available, I have no idea just why I liked Ghostbusters so much. It did have some impressive features, such as the inclusion of multiple speech samples (one of which I’ve stolen,) but games like Fantasy World Dizzy managed to talk as well – so it can’t have been that impressive. Perhaps the thing that impressed me the most at the time was the ability to carry your bank balance from one Ghostbusters game to the other, so if you had to start off using a cheap VW Beetle as a budget Ghostbuster-mobile you could upgrade to the film’s hearse or to a fancy-schmancy sports car in subsequent play-throughs. Because I was young, and stupid, I also remember seeing screenshots of the climactic final battle which featured in other versions of the game and being excited by the non-existent possibility of unlocking it on the Spectrum if I busted enough Ghosts. Oh dear.

Looking back on it now, I think it’s a refreshing to see a licensed title that was constructed in the right way:  rather than shoe-horn the Ghostbusters license into an existing genre template, the developers tried to build a game around their interpretation of the Ghostbuster experience. Had more developers handled their licensed titles in a similar fashion over the years, licensed games may not have plummeted into the abyss they apparently have.