Plogue have  just released an update for their Chipsounds plugin – something I’ve used extensively on Attack of The Terrible Lizard Kitty – and are currently selling it for half price. I thought now would be a good time to jot down a quick review.

In a nutshell, Chipsounds is Chip Tune powerhouse, emulating the audio-generating innards of more than a dozen classic computers and consoles.

If it had a theme, I’d say Chipsounds’ chief characteristic is one of compromise. I don’t mean this negatively in any way, shape or form: to have taken the amount of hardware they have and manage to present each chip in a form which is more-or-less accurate is an incredibly impressive feat in itself – and that’s before you get to the clever interface they’ve created to easily work with them all. Compromise is, nonetheless, the order of the day. Though they’ve definitely managed to balanced a ton of competing interests, the decisions Plogue have taken may not please everyone.

One particular drawback is that, because of the huge breadth of the systems covered, some of the more advanced/idiosyncratic features of each chip aren’t always supported. When emulating the good old Zx Specy, for example, you can’t blend the noise generator into the pulse wave. The lack of functions like this will definitely be a problem for some.

Likewise, other people may not be happy with some of  the interface compromises. Though it has its’ fair share of knobs to twiddle with, when it comes to creating patches you’ll need to understand the tracker-like Wave Sequencer interface to really get the most out of Chipsounds. I’m guessing that some folks who are used to other synths may find this arrangement too complicated, while the more hardcore will find it a step too far away genuine chiptune. For most, however, I’d say they’ve got the balance just about right: With a little help from the manual you should be up and running in no time and the tracker-lite interface is a great way to get you thinking like an 80’s videogame soundtrack composer. 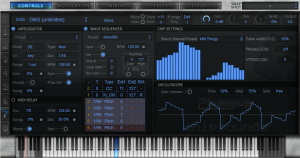 Finding any niggles at all seems a bit miserly, however, when you consider the wealth of creative opportunities Chipsounds allows. As mentioned above, for those just interested in the pure chip side of things there is a huge breadth of devices on offer – and this list is still growing. In 1.6 they’ve added support for 8-bit Amiga sampling an a whole load of classic arcade boards. Impressive.

For those just looking for interesting sounds, there is a ton of stuff in here for you too. Built-in hardware effects can be added to transform your sounds into something entirely new, and you’re also able to mix different chips into the same instrument in order to create new sounds unlike anything heard on any of the individual computers/consoles. For the lazy, Plogue even provides a glut of patches for the individual chips, along with some interesting pre-built instruments.

In fact, if you have any sort of interest in electronic music, I can’t really think of an excuse not to get Chipsounds (bar being completely broke.) When you think about the economics, you can easily pay £30 for a professionally built emulator for a single chip. Considering Chipsounds gives you 12+, it’s a no-brainer at full price. Let alone half!

Chipsounds can be bought from here The half-price offer ends Monday, so gogogo! I cannot recommend it highly enough.