Creating Fatherhood required a surprising amount of mental discipline, thanks to a sudden and almost irresistible urge for PROCRASTINATION. Consequently, I thought I’d do a quick couple of posts on the things that have been distracting me over the last month.

So then, for the last week i have mostly been distracted by the release of Sonic the Fighters onto PSN. Considering that Sega’s retro releases in recent years have focused almost entirely on the Megadrive and Dreamcast, it was surprising to see some of the bigger titles from the Saturn era (like Fighting Vipers and Nights) finally receive a bit of attention. I was completely blown away, however, when Sega announced that this 90’s arcade-only oddity was receiving a re-release. Thank you, Sega, for being totally unpredictable! 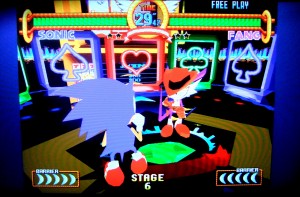 I remember seeing Sonic the Fighters in the flesh back when London’s Trocadero contained a Sega World on the upper levels (I don’t want to think how long that’s was.) I never actually got round to playing it the first time around,  though. The queue was always just a little bit too long, and at the time I (obviously) had no idea Sega World’s life span would be so short. So then, is the game worth a 15 year wait? Well, possibly not – but at £3 I’d say it’s possibly worth a punt, for a few reasons.

Firstly, the gameplay itself is a little out of the ordinary. You’d think that the simplest thing for AM2 to do would simply have been to reskin Virtual Fighter or Fighting Vipers and rush the whole thing out of the door, but that doesn’t seem to be the AM2 way.  Sonic the Fighters, instead, features a more basic, stripped-down combat style than Sega’s other arcade fighters, with very simplistic move sets.  It’s similar to Fighting Vipers to the extent that there are no ‘Ring Outs,’ and that characters can make use of the walls which surround each ring, but it drops the usual blocking mechanics and instead uses a system of ‘barriers.’ Holding the Block button produces a barrier which temporarily blocks all incoming attacks, but will break if it receives too-much damage.

Unlike other 3d fighters, there’s also a high level of cartooniness on offer in Sonic the Fighters. You won’t generally find the likes of Ryu’s fireball or Blanka’s Cannonball in the more conservative 3d genre (SFIV doesn’t count: the combat is on a 2d plane,) but with the inclusion of moves like Sonic’s spin dash and Knuckles’ Glide, Sonic the Fighters is definitely the exception to this general rule. As a Blanka player it’s also nice to see the priority switched around for a change, with a spinning Sonic easily knocking Fang “The Sniper’s” weedy pop-gun attack for six.

There may be a reason why other 3d fighters settled for much more conservative move sets though: when the action is at it’s most frantic in Sonic the camera can be all over the place, and some of the collision detection can be questionable to say the least, making for a frustrating experience. So then from a gameplay perspective it’s definitely a very mixed bag 0 but at least its unique. 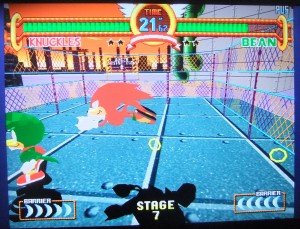 Gameplay aside, there are other factors that make Sonic the Fighters worth a look.  One factor that really impressed me  is the amount of effort AM2 went to to create a game which fit unquestionably into the world of 90’s Sonic. There are no human cities or creepy Anime women here –  this is purely the world of the Megadrive Sonic titles remade in 3 dimensions. Some stages, such as Amy’s magic carpet merely have a Sonic feel, but there are bonafide stages based on Casino Night and Mushroom Hill included too. Though the music feels stylistically wrong – sadly AM2 opted for the up-tempo Happy Hardcore-lite found in a number of Sega’s arcade titles from the period – the actual underlying melody lines have a very Sonic-y feel to them. It’s also nice that, along with regular characters like Sonic and Amy, AM2 were able to include Bean the Duck: A shameless tribute to their classic 80’s coin-op, Dynamite Dux

In conclusion then, it’s quite clear why the fabled Saturn port of Sonic the Fighters never materialised –  The game was simply too basic. Seen in its proper context in an arcade, however, I can understand why I could never get close to the machine when i was younger. Who could resist the draw of a 3d Sonic game? When you consider that this version is online enabled and priced similarly to Master System title Alex Kidd in Miracle World, it’s definitely worth the punt – if just to get an idea of what a Saturn-based Sonic title could have looked like. 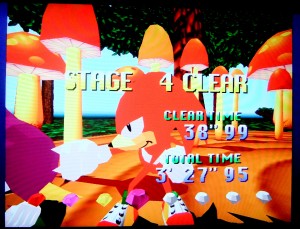