I’ve always had a bit of a soft spot for Jumping Flash! I first encountered it on one of the demo disks (what a quaint concept!) originally bundled with the Playstation One  (the disk also included demos of Wipeout, Ridge Racer Revolution and a nifty 3d model of a T-Rex) and was hooked from the moment it booted up. As game go, it defies classification, managing to touch on both first-person shooters and 3d platformers while at the same time being something quite different from both. 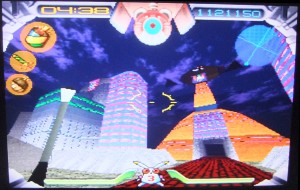 So how exactly does it work, then? Your character is Robbit, a giant mechanical bunny (not a giant mechanical lizard, but hey – I’ll take what i’m given,) whose goal is to explore Jumping Flash’s various worlds collecting 4 carrot-shaped Jet pods in each stage, before escaping on a giant exit pad (against the clock, naturally.) You see the world through the eyes of Robbit, whose main skill involves having the ability to leap high into the air. Once air-born, the game reveals the one vital trick is has up its sleeve (one that, perhaps, more 1st-person platforming games should have lifted:) as you jump, Robbit looks downwards, allowing you to use your shadow to plot your landing with pin-point precision. This precision means that developers Exact were able to include features and set-pieces not normally found in 3d platformers: Not only can Robbit damage enemies by jumping on their heads, but some of the more difficult carrot pods can only be reached by using the heads of the enemy to extend your jump.

Not that jumping is Robbit’s only form of defense – the game also has first person credentials as well. Your default weapon is a low power laser, which is good enough to quickly dispatch most of the game’s animal-themed foes, but you can enhance your arsenal with a number of firework-themed special weapons. That’s pretty lucky to, as every third stage is a showdown with ridiculously OTT (but normally pretty easy to defeat) boss character. Hurrah. 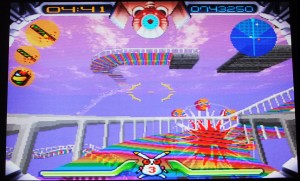 By anyone’s standards, Jumping Flash! is not a long or difficult game. In fact, having not touched it in a while I managed to make it to the end of the increased-difficulty ‘extra’ mode in just under an hour and a half, without using any continues and barely using a couple of lives. I’m not sure this is a terribly bad thing mind you: If you take a certain 5 minute long Sega arcade game out of the picture, Jumping Flash! might be my most replayed games. Why? It might be 16 years old, but it still feels as fresh as the day the demo disk first popped into my virgin Playsation. Sure,  there are a number of  interesting and innovative platformers out there today, but all of them live in the very, very tall shadows cast by the likes of Mario 64 and the original Tomb Raider. Jumping Flash! quite simply, doesn’t. It’s not that it tried rewrite or defiantly ignore the rules: in 1995 the simply weren’t written yet. Working with a blank canvas the developers created mechanics, worlds and problem solutions not really found in any other 3d title before or since – and this originality makes it a joy to revisit time and time again. Oh, and before I forget the music and sound are ace too. 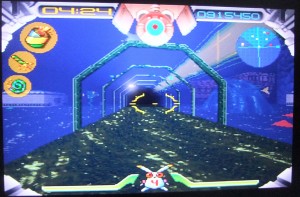 Jumping Flash! can be found pretty cheaply for the PS1, or can be downloaded  from the PSN store.