For anyone wondering (ok, so you probably weren’t) the vocal samples from Monkey Man come from an old Sega-published Brawler called ‘Riot City.’ Never Heard of it? Me neither, until i discovered the soundtrack over on this site.  Lets load her up and have a look at her, shall we? 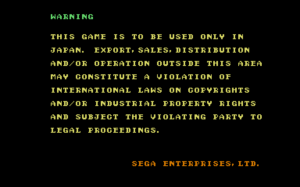 So it turns out that, despite pretty much everything being in english, the game was strictly  Japan-only. Sorry Sega, I’m playing this in the UK. Please don’t sue me! Aieeeeeee! 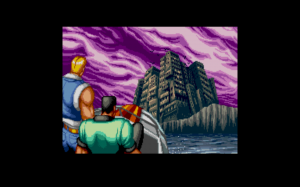 Straight past the title screen, the game reveals a very familiar set up: A kidnapped girl, a couple of good detectives facing improbable odds, and a whole load of remarkably similar-looking bad guys who need a good boshing. 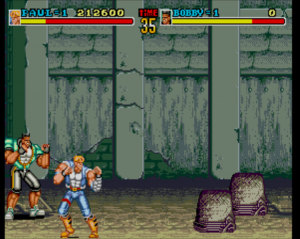 Both characters are largely similar (the main difference being that Bobby sports an 80’s flat top and a mildly racist boogie-walk.) They’re both pretty slow (with Paul being mildly faster) and both attack with a reasonably limited range. They also sport the standard selection of moves, with a basic punch combo, basic throw, basic flying kick and an energy-using special move being the only tools they provide you with to see off the relentless onslaught of MID agents. Yes, that’s right – though some of the enemies carry them, Riot City features no usable weapons of any kind. A major oversight considering this appeared a couple of years after Final Fight, and at the same time as Streets of Rage. 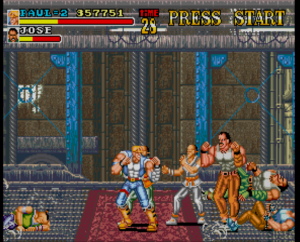 Riot City features an interesting array of (largely Moustached) villains,who, surprisingly, don’t look like they’ve just been blatantly stolen from Final Fight. Of course, the denim-wearing punk is present (you can’t be a criminal gang until you’ve got a vast army of denim-wearing Punks in your midst,) but at least you have unusual fellows like an American Football player and a cowboy hat-wearing goon to add a touch of variety. Unfortunately, the game designers decided to spam you with all of these different enemies quite early on into proceedings, so by the end of the end of the 2nd stage (of five) you’ve seen most of what Riot City has to offer. 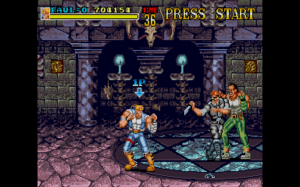 All of that is a bit of a shame really, considering that the designers did put some effort into other areas. I’m a fan of the Final Fight-style soundtrack (complete with awesome FM guitars and brass) and you do get to fight in a number of unusual arenas, such as the pentagram room in the above screenshot. There are also some interesting set-pieces, such as a multi-tier battle with a martial arts master called ‘Lee'(!) and a boss battle with a mad doctor (who, incidentally, provides the main Monkey Man sample.) 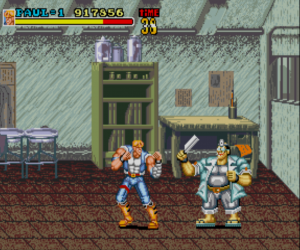 Overall then, it’s easy to see why Riot City was lost to the annals of history. Though it has couple of nice design flourishes, the bulk of the experience is just too basic and derivative to be memorable. To be published two years later yet lack some of  the fundamental features found in Final Fight is simply unforgivable. Worse still, it isn’t even particularly enjoyable. I know the original purpose of these machines was to work your wallet over, but each area simply spams you with too many waves of bad guys before you can progress. Fighting an endless army of familiar band guys with no weapons and a handful of moves becomes very wearisome very quickly. This is definitely ‘one for brawler fans’ where ‘one for brawler fans’ actually means ‘a little bit poo.’ 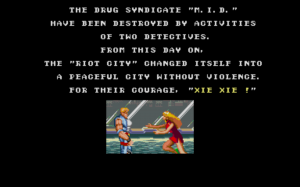