Because it’s taken me AGES (to be this good, etc) to find a decent MAME/front end combination for the mac, we might as well get our money’s worth – so here’s a review of forgotten Sega classic, Action Fighter. Hurrah!

Ok so describing this one as forgotten might be pushing it a bit: Action Fighter does seem to have a bit of a cult following, but interestingly it seems to be focussed more on the Master System conversion than for the original arcade machine. Most peculiar. 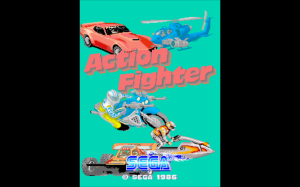 On loading the title up, you’re greeted with a title screen that tells you pretty much everything you need to know about Action Fighter: You’re going to be driving Cars and dune buggies, flying helicopters, riding motor bikes and, quite possibly…err… . 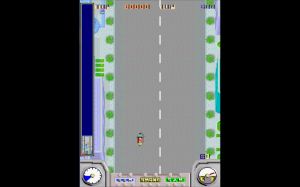 Yes, it’s pretty hard to talk about Action Fighter without mentioning Spy Hunter. If we were being kind we could definitely say that it appears to have been Sega’s…err…inspiration. The game play is VERY similar: You have a birds eye view of the world as you pelt along a succession of road-based stages and it’s your job to vigourously spray every other vehicle with bullets while you desperately try to avoid crashing or taking a hit yourself. 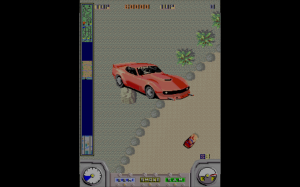 Disapointingly, some of the cooler aspects of Spy Hunter seem to be missing from Action Fighter. Aside from Spy Hunter’s signature reloading trucks, Action Fighter misses the large variety of enemies found in the title it emulates. You’re never confronted with any sort of bullet-proof cars, for example. The damage mechanics also seems to be much more simplistic: Even in the car, you generally die if you touch anything, which is a shame. 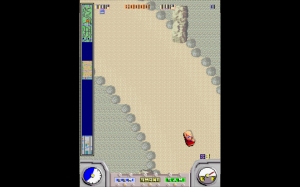 Oh dear, It’s not looking good so far is it? So what does Action Fighter have in its corner? Well, there are a couple of interesting mechanics: while you have complete control of your vehicle’s speed, but fuel decreases at a set rate so This creates a strong risk vs reward dynamic, with you needing to travel slow enough to controlyour vehicle while at the same time travelling quick enough to make it to the next fuel supply which, (like other power ups) is dropped from a helicopter. 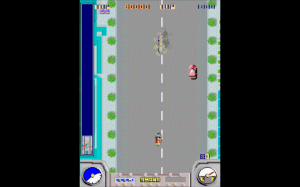 The variety of weapons found in Spy Hunter (Smoke Screens, missiles) is also present here and -speaking of helicopters -There are a wide variety of different vehicles on off: The chopper section, for example, plays as an interesting Xevious clone,  while the off-road Dune Buggy sections offer you a much wider area of terrain you can drive over. 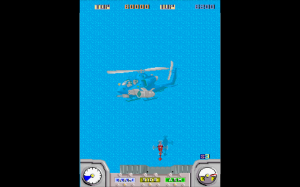 In fact, Action Fighter feels a bit more open and dynamic than Spy Hunter. The map is huge and complex: Each section has a number of branching paths, and you’re often offered a choice between different vehicles. There are also an impressive variety of backgrounds on offer, from rolling canyons to decimated cities. 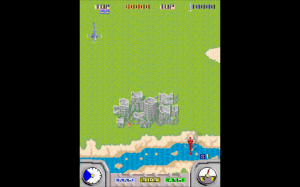 The soundtrack is also quite impressive. Spyhunter was always going to take some beating (thanks to its use of the ever-fantastic Peter Gunn theme,) but Sega did a pretty good job with Spyhunter. Each of the vehicles has its own theme, and most of these are pretty good – even by Sega’s usual high standards. I’ll definitely be looking to rip the helicopter theme, at the very least. 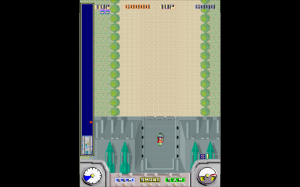 Overall then, ActionFighter is an interesting game. With it’s large number of vehicles and detailed backgrounds it’s definitely a step up from its inspiration – but when you factor in the fact the game was from 1986 it should well have been! As a contemporary of The likes of Outrun it does feel a little basic. But with that said, i’ve been playing the bloody thing constantly over the last few days – and isn’t that essentially all you can really ask from an arcade game?