The great thing about mucking around with old arcade games is that, sometimes, you stumble across half-remembered titles which you weren’t completely sure existed. One title, for me, is Sega’s 1994 title Wing War. 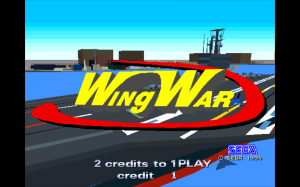 I remember seeing this once, in London’s Sega World. As always seemed to be the bloody way, there was much too big a line for me to bother cueing up to play it. So lets give it a go now, shall we? 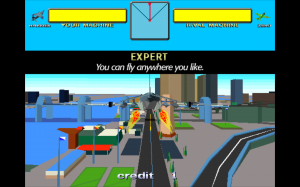 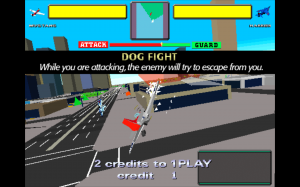 Developed by the wizards at AM2, Wing War is actually 2 games in one, both involving one-on-one aerial dueling. ‘Dog Fight’ plays more like a traditional arcade game, with each plane’s range of motion being completely locked down, and each taking turns to attack/ defend. Much more interesting is the ‘Expert’ mode, which is (to all intents and purposes) a fully-functional flight sim. Go anywhere, do anything – well as long as it involves blowing the stuffing out of the other aircraft, of course. 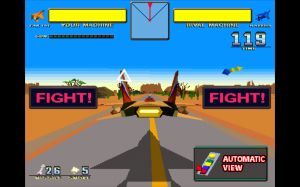 Of course, there are limitations. Takeoff isn’t exactly modelled accurately, and you’ll never have to land. Though susceptible to any munitions, your aircraft is surprisingly invulnerable to smashing into canyon walls, buildings or the ground. You also won’t really  need to worry about stalls, spins or tail slides. 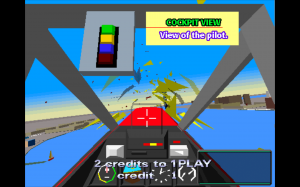 Ok ok, I admit: calling it a ‘sim’ might be stretching it a bit, but i’m not exactly sure what else to call it. It’s a funny old thing – It almost feels more like a tech demo, rather than a fully-fledged game. Alongside the unfinished-feeling crash mechanics, You’re presented with just a hand full of arenas in which to do battle, and a limited and highly eclectic choice of aircraft: You can fly a Harrier, for example, but no Spitfire. Most bizarre. It’s also very short. The main tournament has just 3 rounds – along with a bonus battle with a UFO. 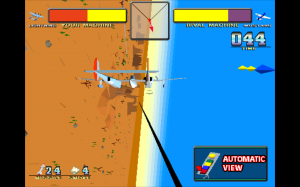 Having reeled off all of those peculiarities, I can tell you that onthe plus side is that this game is actually REALLY good fun. Regardless of mode, the combat in Wing War is pretty frantic, and actually quite exciting when both planes are edging nearer to getting a missile lock. All of the planes have a similar amount of health, and everyone gets missiles (regardless of any anachronism,) So every duel feels balanced and registers pretty low on the frustration factor. Though limited in number, the arenas are also well designed, and provide you with canyons and buildings to dodge and fly through. Not surprisingly the soundtrack is pretty good too – as long as you don’t mind how slapbass-heavy Sega were in the mid 90’s. 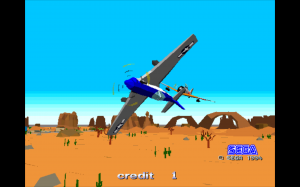 Most incredibly of all, however, each aircraft features a fully modelled 3d cockpit. They don’t look great (nothing does – the world is made up of untextured polygons,) but the fact that they feature at all is a pretty big thing: They were only a relatively recent innovation in PC flightsims, and unheard of in the arcade. Go Sega! 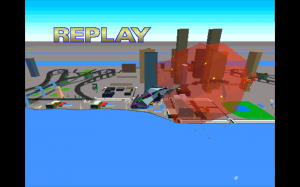 Overall then, Wing War represents Sega and AM2 at the peak of their creative brilliance. It may neither be the best nor most complete arcade title they released, but it’s definitely worth a look today. An online-enabled modern release would be certainly be most welcome.

Edited because i was corrected about 3d cockpits. Oops.