Right, so according to the nice chaps over at 1morecastle.com, today is review a great game day! Hurrah!

But there are so many great games, how can you pick just one? should it be for the Megadrive? Saturn? What about the Snes, PS1 or N64? How about the Master System or a classic DOS title? Arrrgh.

Well, at least, that’s how I thought I  should feel.  Strangely, however, I realy didn’t. From the moment I saw the link, I knew exactly what title I would be reviewing.

To business then:  Target Renegade was released in 1988, as a computer-only sequel to the arcade game Renegade, itself a heavily Americanised version of River City Ransom-forerunner Nekketsu Kōha Kunio-kun. If the words ‘computer-only’ don’t exactly fill you with confidence, don’t be put off: Target Renegade was critically acclaimed at the time, scoring 9/10 in a number of the most popular games mags. It also reached number 13 in Your Sinclair’s reader’s top 100 titles. 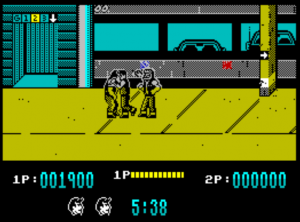 So then, Target Renegade is definitely awesome…but what actually is it? Like Renegade before it, Target Renegade was a seminal title in the brawler genre. Where as the original Renegade nailed down the basic attack/flying kick/grab mechanics, Target Renegade added scrolling backgrounds and plenty of new enemies and weapons to the mix. It doesn’t have much of a story, but what it lacked in narrative it made up for in variety, challenge, chunky character sprites and a crunching soundtrack.

As experiences on the Spectrum go, you’ll find few as intense as Target Renegade: within the first 15 seconds or so you’ll have kicked a motorcyle goon off his bike, borrowed his mate’s  sledgehammer and then used it to take out the rest of their gang. Well, either that or you’ll have lost half your energy bar anyway. It definitely doesn’t pull any punches, but on the flipside it is extremely rewarding experience. Though difficult, it never feels unfair, and the varying recovery times of your punches, flying kick, back kick and grab allow you to quickly build up basic strategies. 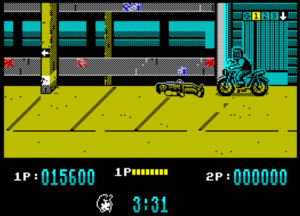 For an 8-bit title it’s also remarkably varied: the game features 5 differentstages (from a multi-story car park, to a very British-looking pub) which feature very different villains wielding a variety of different weapons. Though you can complete all of these stages in about half an hour (like any good arcade game,) those skilled enough to complete the game once get to go around again – with the difficulty jacked up significantly. Theres definitely plenty of play time to be found here for those who are worried about longevity.

On top of that, the game excels in the graphics and sound departments. The spectrum’s colour palette may have been limited, but each of the levels is rendered in its own colour set, giving each one a very different feel from one another. The character designs are chunky and memorable, while the sound effects are sufficiently crunchy. There’s also a good 3 or 4 different pieces of music on the 128k soundtrack – an impressive thing for a speccy game. 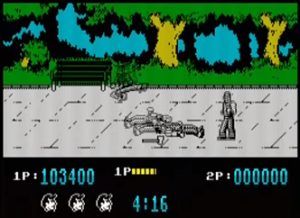 In terms of covering the basics – graphics, sounds, moves etc – Target Renegade is a solid title. But what makes it a great game instead of merely being a good one? for me, there are a couple of important factors.

For one, Gari Biasillo’s soundtrack is truly a wonderful thing that definitely lifts the entire experience.  While other composers may have ventured down predictable dance/rock routes (the latter especially, considering the protagonist is dressed in denim and leather,) Biasillo’s melancholiic – even mournful – arpeggios frame the action in a different and much more interesting light.

On top of this, and perhaps most importantly of all, the game is incredibly satisfying in the feedback department.  I know it really shouldn’t be, Considering the limited audio-visual palettes the authors had at their disposal, but it is. Not only is the knock-knock-knock of your basic punch combo as satisfying as any move in Final Fight or Streets of Rage, but somehow they’ve managed to convey the weight of a hammer or snooker cue blow as well, CRUNCH. For me, this is absolutely vital to the experience. This satisfying player feedback papers over any cracks one might find with the difficulty curve or with the relatively simple move set – and explains why i’m still addicted twenty years later.

So what are you waiting for? Go find a Speccy (definitely not a C64) and go and play Target Renegade today!