So the other day i popped down to  RetroGameBase in Streatham  ( absolutely amazing shop by the way – well, well, well worth a visit.) Despite an alarming amount of temptation sitting on every shelf, I managed to escape with just a couple of titles – one of which was US Gold’s Outrun Europa on the Master System.

Naturally, I was aware of the existence of Outrun Europa (The the glossy whole-page adds in Your Sinclair were hard to miss) but until now I’d never actually played it, so this was an exciting moment. Hurrah. Now, it may say ‘Outrun’ on the box, but it was developed by Probe, published by US Gold and only licensed by Sega. Is this a genuine Outrun game, then, or some other sprite-scaler undeservedly wearing the Outrun badge? The inclusion of spies, boats and weapons would definitely seem more of the latter. Crumbs.

Surprisingly, a look at the development history reveals something a little more complex. Eventually released in 1991, Outrun Europe began life as a direct to the original Outrun, called Outrun Europe. Developed by Probe between 1988-89, The original version simply took the familiar Outrun Testarossa and music and dumped them into a variety of new European locations. It actually reached an advanced stage of development, but was cancelled when US Gold decided to port Sega’s own sequel (Turbo Outrun) instead.

With the home ports of Turbo Outrun having received only a luke warm reception, You’d think that Probe and US Gold may have been a bit reticent to return to their  cancelled Outrun Europe project. They didn’t just return to it though – oh no – they scrapped it and rebuilt it from scratch! Cor!  Alongside the additions to the Outrun formula that AM2 added to their own sequel, they decided to add a whole lot more: Along side refillable Turbos, they added enemies, weapons, pickups, and the rozzers. If that wasn’t enough, they also added multiple vehicles to the mix as well! Sound ambitious? That’s because it was – and it was released across 7 formats to boot! 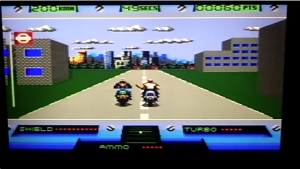 The roads out of London aren’t really this quiet 🙁

So how does it work in practice? Surprisingly well, really. Not only did they  successfully manage to cram an impossibly large feature set into the game, but somehow it turned out being one of the best looking 8-bit racers to boot. While the sprites might look sufficiently Master Systemy, the scenery looks like it could have been lifted straight from a Megadrive game. Somehow, Probe also managed to top this off with multiple backgrounds per stage, and by managing to pull off 16-bit level sprite scaling. Blimey.  The frame rate is about par with other less complex sprite-scalers, and the time spend creating such complex visuals doesn’t appear to have impacted on other areas: The handling is as tight as you’d expect from an Outrun game, and it features a solid and expansive musical score (for the MS, Obviously.)

In terms of gameplay, it plays pretty well too. As mentioned, the handling of the vehicles is very tight and the fact that they all feature different weapon sets provides you with a good level of variation. Having taken the potentially risky option of featuring neither lives or continues, the difficulty curve is ust about right. Time limits are stretching without feeling impossible, and all of the enemies are conquerable once you have the right strategy. 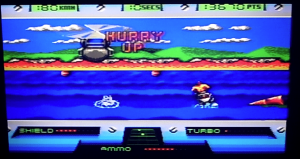 I can see France! Hmm. And a helicopter

Of course, you’re unlikely to have an 8-bit title this ambitious without having a few stumbles along the way, and there are a couple of key issues that prevent Outrun Europa from being perfect. For one, the game is let down by the MS controller. With shooting and…err… turboing taking up the two face buttons, acceleration and braking is controlled by the d-pad –  A solution that’s definitely quite far from ideal. The  chunky vehicle and scenery sprites also mean that you only ever face one enemy/obstacle vehicle at a time. Though Probe did a good job of disguising this with the rate at which vehicles enter/leave the playing area, they failed to disguise this. Sorry guys. Finally, The water stages, which obviously lack the roads but lack item pickups too, are feel like a bit hit an miss ( Though the inclusion of the mortar – which fires further depending on how long you hold the button – was a good idea.)

Overall then, Outrun Europa is a bit of an odd one: Perhaps one step too far from the care-free cruising of the original, it doesn’t feel like it can quite call itself an Outrun game. As a title in its own right, it manages to be both an enjoyable driver  and an impressive demonstration of just what the Master System was capable of. Well worth picking up for a fiver, anyway.

A video of it in motion can be found here: