So the other day,  1morepodcastle host/Nintendo Legend author Eric Bailey posed an interesting question on twitter:

What single video game has contributed more than any other to the public’s negative perception of gaming?

Of course, a lot of people immediately fired back with a list of the strongest and most obvious candidates (Mortal Kombat, GTA 3 etc,) but  i suggested something a little different: Night Trap on the Mega CD: 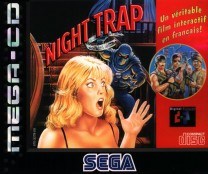 This is as risque as it gets

If it sounds like an attempt to be whimsy or deliberately obtuse, it really isn’t. Honest! You see, Night Trap managed to cause a major stink back in the day. In fact, alongside Doom and Mortal Kombat, it was considered to be such a violent corruptive force that it actually led to the creation of the ESRB rating system in the US. Blimey.

So what exactly was Night Trap? Essentially it was little more than a slightly interactive video: A group of young women are enjoying a sleep-over at an isolated lakeside house, and it’s up to the player to protect them by trapping a barrage of pyjama-clad vampires before they can do anything worse than give the girls a bit of a fright.  That’s pretty much all there is to it.

If the premise sounds a bit horror filmy, That isnt an accident: The game is a deliberate spoof on dodgy vampire films. But here is the really interesting thing, the developers consciously went out of the way to make it completely clean. There’s absolutely no nudity, and any serious violence always happens off screen. If it were a film, you could show it on Syfy in the middle of the day without anyone batting an eyelid.

So how did something tamer than Batman Returns end up in the dock alongside the graphic fatalities of Mortal Kombat and the Chainsaw-wielding fun of Doom?

The answer, depressingly, is that the Night Trap was never really in the dock at all. The Night Trap that caused so much trouble was a “shameful” and “ultraviolet” game that encouraged the player  “to trap and kill women.” Journalists and politicians were especially irked by one particular scene, dubbed ‘The Shower Scene,’ where a scantily clad girl is set upon by a group of villains in a bathroom. How gruesome!

Thanks to the power of youtube, however, you can see the actual “Shameful” “ultra-violent” scene here:

Pretty much safe for work/school/home/library etc isn’t it? Notice, as well, how the player is berated at the end for NOT saving the girl? Considering the amount of senior politicians and journalists who came out against it, it’s slightly depressing how easily all of their misunderstandings could have been dispelled by spending just 5 minutes with Night Trap. They only needed to watch the intro, in fact.

Of course, appearing in front of the a Congressional hearing, the CEO of developer Digital Pictures attempted to explain the true point of the game and the context of the scene, but his explanation fell on death ears: Night Trap was temporarily withdrawn from sale in the US, and the ESRB rating body was born.

I suppose, in theory, you could say the  backlash against Night Trap was potentially a one-off. After all, games were still  seen as a child’s toy. It is understandable that the authorities would have been panicked by gaming suddenly gaining adult potential through FMV technology.

But no! Sadly this rubbish still happens today. After the release of GTA 4,  Connecticut Senator  Gayle Slossberg decided to come out against its infamous, and entirely non-existent, rape scene.

So having thought about it, both myself and everyone else who answered Bailey’s tweet were wrong. In fact, The games that have caused the most damage dont actually exist: They may share their title with an actual videogame, but you can only find them in the imagination of the  politician or journalist who sees themselves as some sort of moral crusader.

One Reply to “Night Trap:The Most Dangerous Game Of All”