The weird difficulty spikes, the jerky animations, the single playable character. what? You didn’t think we were talking about timeless classic “The World Warrior” did you? No, no, no! This is about the original sequel to Street Fighter, the computer-only title Human Killing Machine. This was released on the ZX Spectrum and a bunch of other formats in 1989. 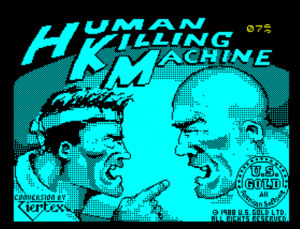 The loading screen. Arguably, this is the best part of the game.

You wouldn’t think you could go wrong with a title like that, would you? Someone desperately needs to buy the license to this just so we can see the Daily Mail whip themselves into a righteous frenzy, but I digress: HKM was an attempt by publisher US Gold to create their very own sequel to the original Street Fighter, having already successfully ported the arcade game to the home market. This was something they did quite often – They also produced their own sequels to Strider and Outrun.

In theory, the core Street Fighter engine was the only thing reused here: Developer Tiertex cunningly swapped out the original Street Fighter characters and scenario for one of their own devising: Kwon (A rock-hard Korean martial arts champion who bares more than a passing resemblance to Ryu)  travels the globe, beating up a variety of colourful characters (From Dutch prostitues to Syrian terrorists)  in order to prove that he is the toughest cultural stereotype of them all. Sound familiar? Yes, Tiertex effectively created a cheap knock-off version of a game they already held the rights to. Puzzling. 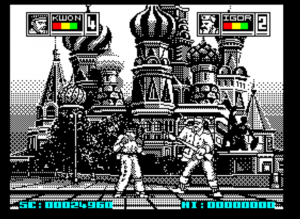 On the gameplay front, HKM is also very, very similar to the original. Not only does the game continue Street Fighter’s tradition of featuring just one playable character, but the move set is strikingly similar as well. Compared to the amount of changes between Street Fighter and “The World Warrior,” the changes here seem essentially cosmetic: the round timer has been completely removed, and Kwon must knock down his opponent at least three times in order to be move on to his next challenger. 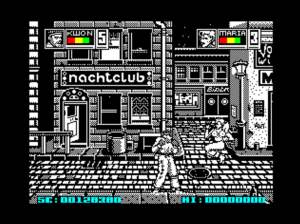 Indeed, the only change that seems like it could have any effect on the fighting is a (limited) health regeneration system: If you or your foe can keep out of the fray for long enough, then you will be rewarded with a fraction of your health regenerating. Woo. When combined with the lack of a timer, you may have thought that this would have had some baring on how the player approaches each opponent. Sadly, the effect just isn’t dramatic enough to encourage the player to alter their strategies. Especially when the first half of the game can be completed by just spamming the crouch-kick buttons. Blimey. 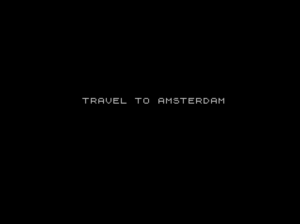 This is HKM’s version of the Street Fighter map screen. Oh dear.

So then, does HKM have anything going for it? Well, the graphics are pretty top-notch for a Spectrum title: Not only are the backgrounds detailed and gorgeous, but somehow they pulled off an impressive amount of detail inside the character sprites too. Amazing. The core engine is also practically identical to Street Fighter, which was pretty well-loved on the Speccy at the time, so it isn’t  all terrible.

Indeed, HKM also has one rather odd feature going in its favour: it is one of the only fighting games where, playing as a human,  you can BEAT UP ANIMALS. Yes, that’s right, If you’ve ever wanted to go toe-to-toe with a wolf or a bull, well this might just be the game for you! Take THAT PETA. 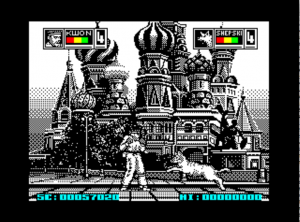 So yes, on the whole, HKM on the Speccy doesn’t have THAT much to recommend it. So what about the other versions? Unfortunately the Speccy appears to be the version of choice: while the Spectrum version managed  review scores in the 70-90 region, the Amiga and C64 versions received less than half that. Ouch.

Overall then, it’s pretty clear that HKM probably deserves to be little than a historical curiosity. While Capcom’s sequel expanded massively on almost every single element that made the original great, Tiertex’s title is little more than a confused sidestep: They seem to have reliased there was room to improve the Street Fighter formula, but had no idea how to go about it. I suppose it was a good effort though. Better than the Master System version of Strider, at least.

One Reply to “If we’re honest, Street Fighter 2 Was a bit poor.”