So today i want to talk about Strider on the Master System. Licensed by Sega but developed by Tiertex (they of HKM fame,) it’s a largely terrible conversion.

This is a bit odd though. Tiertex also put together the Spectrum port, which was actually a pretty solid conversion. So what, exactly, went wrong?

The first thing to note is that, in terms of overall design, both games are built around a similar structure: On both systems the levels had to be significantly simplified to fit inside the relatively tiny amounts of ram available, and they also feature the same horrendously lame ending, telling you that the entire thing was a simulation for the proper invasion and sending you back to the beginning of the game. Hmm.

It’s also worth noting that the Master system version of Strider is arguably the more correct: On the Spectrum levels 3 and 4 appear out of order, and there appear to be greater changes made to the attack patterns of certain bosses. 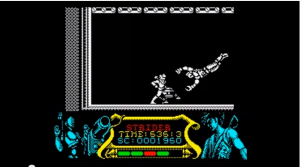 On the Spectrum, Diving Man! 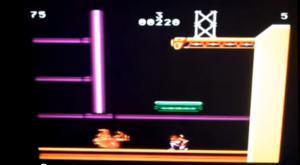 On the MS, Roly-Poly man!

So where does it all go wrong? First lets look at the main screen. In the Spectrum version, the biggest compromise is the game world. The amazingly detailed backgrounds from the arcade have completely gone, and the world is trapped within the confines of a massive, screen-gobbling HUD. The upshot of this, however, is that the Spectrum version has large and beautifully crisp sprites: A factor which shouldn’t be underestimated when dealing with a game like Strider.

On the Master System version, the opposite is true: The larger play area takes up the entire screen, with poor Strider Hiryu himself feeling a bit dwarfed in comparison. While the background in the Spectrum version is a world of perpetual black, on the Master System much of the detail from the arcade has been retained – without the animation or advanced colour palette, of course. The Speccy’s beautiful HUD artwork is completely absent though – all you get is a couple of numbers hidden at the top of the screen, and the whole thing feels more hazy and less defined. 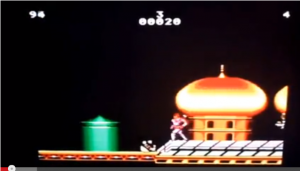 Lovely and colour, but not quite as defined. 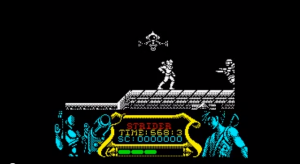 Monochrome, but look at that sharpness!

Of course, some of these compromises are the sort or thing you’d expect when dealing with different graphics hardware – larger sprites were something Speccy developers often deployed to avoid colour clash, for example – but when you look at some of the creative decisions it all gets a bit weirder.

For instance, like the original arcade, the Spectrum version begins with Strider  making a bold appearance on some futuristic looking hang glider. Hurrah! This, however, is completely omitted from the Master System version. This doesn’t appear to be based on any sort of technical limitation –  technically demanding features like the Giant Mechnical Gorrilla made it onto the Sega system – so it appears to be a purely creative choice. Bizarre.

What really lets MS strider down though (well aside from the shrill, and basic musical score) is the terrible controls. Regardless of version, Strider’s jumping mechanics are a little different to most games, but but the controls really lack responsiveness and the timing feels off, making Master System Strider a real chore to play.

So what lies at the core of all of these Bizarre differences? The rather predictable answer seems to be that each version had a different programmer, and there was a lot of work involved in shrinking a mammoth 6mb game to fit into the RAM constraints of these 8-bit machines. 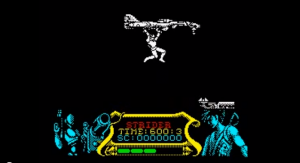 This isn’t as cool as the one in Saboteur II.

Indeed, a wonderful article from an old Sinclair User highlights some of these problems. Naturally some of the titanic bosses provided a real issue (The Mechanical Gorilla measures 96 x 115, and taking up a third of the entire Speccy screen!) but even Strider himself was a problem – His large move list (including the ability to traverse 6 grades of incline) had to be reduced in order for the 8-bits to be able to handle all of the animation frames required.

Incredibly, the maps themselves also required a lot of work after the initial simplifying. They may have been shrunk, but they still needed to be broken down further into smaller sub-maps to fit inside the 48k Speccy’s memory. Blimey. That’s before you consider all the work needed to port the artwork from arcade, to Atari ST to Spectrum/Master System. 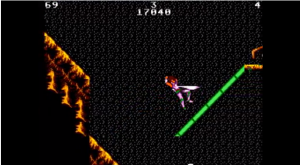 So overall it feels a bit miserly to be mean about either of these conversions. Chris Brunning’s Spectrum port is a classic game in its own right, and still holds up to this day. It’s amazing how the Spectrum version plays the best out of the two – despite the obvious disadvantage of having to program for a variety of different input devices.

Paul Marshall’s Master System version still feels like something of an achievement, even if it controls like a dog and features a soundtrack that’ll make your ears bleed. He did a good job of retaining much of the detail from the arcade, though.

If you want to give either version a try, both are available for cheap on Ebay. Unfortunately, though most of the Spectrum library is abvailable (in free and authorised form) on the excellent World of Spectrum, Strider isn’t  included.