I was browsing the tech blogs yesterday when this caught my eye. I was partly intrigued because Spotify are a service I use to distribute music, but mostly because the guy’s musical name was clearly a Commando reference. 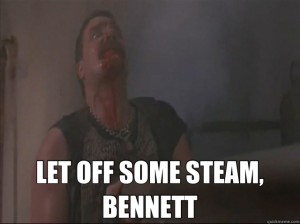 With the inevitable “let off some steam Bennet” out of the way, it really is interesting just how easy it was for someone to arrange tens of thousands of fake Spotify plays. Now, I’m sure there are genuine odd balls out there who will listen to one or two songs on endless repeat (making Spotify’s life a bit harder) but it doesn’t seem like it would be too difficult or obtrusive too keep the bots at bay. Off the top of my head, How about deploying a captcha if a user listens to the same track ten times in a row? or for each 100 consecutive plays from the same artist?

Mind you, I suppose such bots help Spotify just as much as they do the people who create them. After all, the ad revenue will keep rolling in regardless of whether it’s a machine or a person doing the listening. We probably shouldn’t be surprised that they’ve turned a blind eye so far.

What is interesting, however, is the potentially democratising effect this could have on music. Some of The dodgier business practices of the big labels are well known (dodgy shipment numbers, buy-back teams etc.) So it’s nice to see that, in theory, an independent artist could theoretically get their own back on the system.

We’ll, that’s the theory anyway. It’s worth remembering that this was all the work of one guy armed with three automated accounts. Presumably, an organisation with a serious budget could practice such dark arts on a much larger scale, stamping on the little guy once again.

Ho hum. Once more for good measure? Go on then: