Today, I want to take an tentative look at the subject of licensed games. We all know the contradiction: Everyone has a number of favourite licensed games (be it Goldeneye on the N64, Robocop Vs Terminator on the Megadrive, or Teenage Mutant Ninja Turtles on the Speccy,) but the common consensus seems to be that licensed games are rushed, shoddy affairs that cash-in on popular names in order to earn a quick buck. How true is this? This question can only be solved with MATHEMATICS.

Batman On the Nes! This is quite good apparently.

Unfortunately, a global study of this from the 2600 to the modern day is a bit beyond my means. It would need to be kick started, and as these kick starters inevitably end up with people threatening to kill your family because you prefer Goldeneye to Perfect Dark, I decided to opt for a smaller pilot study focussing on a single critic and a single system.

The system I opted to focus on was the NES, because it’s a platform I’m less familiar with, which should help negate potential bias issues. The critic I chose was Eric Bailey from NintendoLegend.com. For a few reasons:

But, perhaps most importantly of all: 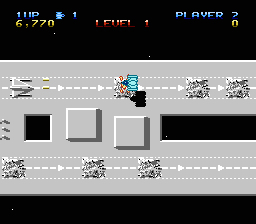 The Last Star Fighter. Apparently this one isn’t so hot

So then to methodology. This was quite simple. I merely took the raw data, carefully sifted the games into “licensed” and “unlicensed lists”, added the total scores for each list together, then divided by the number of games to get an average. In the end, the unlicensed list ended up at about twice the length of the licensed group, but I think there were enough titles available in each list for us to draw some conclusions.

The results then? Well, there wasn’t much in it. The unlicensed list came out with an average mark of about 2.4 (all averages out of 5) while the licensed list had an average of about 2.3. When converted into star rankings, these would be identical. It turns out the spread of marks were remarkably similar across the lists, with both having 5* titles like Mike Tyson’s Punchout and 0.5* titles like Raid 2020.

The next question I wanted to answer was whether all license types were created equal. To do this, I divided the licensed games into broad groups (comics, sports, films, cartoons) and checked to see how the averages compared to the master lists. 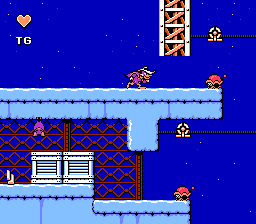 Darkwing Duck was a strong candidate in the Cartoons category

Surprisingly, Cartoons (3.2) and Sports (3) came out the heroes of this group, with both exceeding the main averages by almost a whole point. Though the cartoons category was undoubtedly helped by strong Teenage Mutant Turtle and Chip’n’Dale series, it’s noteworthy the Sports category was the only one with a 5* title. This means the marks in the cartoon category were genuinely higher across the board.

At the other end of the spectrum, both the Film and Comics list finished with averages below the par line, with comics finishing bottom of the group. This surprised me: while you would expect excessive time pressure to result in rubbish movie-based games, you’d surely expect the rich seam of excellent comic material to easily make the transition from page to screen.

The final question I wanted to answer was whether the whole question of licensing was the right one to ask. It’s the developer who actually makes the game after all, so surely they should be the most important variable.

To answer this I looked at the output of prolific NES publishers Capcom and Konami. The results were surprising:  their licensed titles both emerged with significantly higher averages than their unlicensed lists. I’d add a word of caution to this though,  as this was the only category where the sample size felt too small. There only ten games a piece for each developer, and it is noteworthy that the likes of Mega Man and Contra were missing. Still, it’s worth remembering that even if these titles had raised the unlicensed titles to the top, the licensed average for these prolific developers would still be much higher than the general averages for both licensed and unlicensed titles. Clearly, good developers put out good games irrespective of the source material.

Not the best example of a NES game.

So licensed games aren’t rubbish, but are they any good?