No, don’t be silly. The Wii:U isn’t a serious option at all. When it’s £100 it’ll be worth it for multiplayer Mario, but the inevitable lack of third party support inevitably kills off any potential Nintendo’s platform had for taking centre stage. Blimey, Ouya aside, it looks like we’re out of options then. Or are we? As I said further up,  the PC experience seems to be merging ever closer to that of a console. Valve have taken this to an extreme with Steam Big Picture Mode, a feature which reskins your desktop with a controller-friendly and extremely consolesque User Interface. Plug in an HDMI lead and you have an instant console. Hurrah!

But surely a buggy, interface which is barely out of beta can’t compete with a custom user interface designed for a particular console, right? No. Surprisingly, it competes. In fact, it excels. 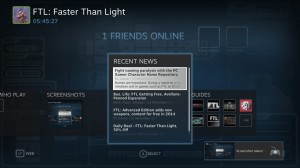 The interface is looks elegant and is incredibly easy to use.

In terms of overall design, you wouldn’t imagine you were looking at a skin for a pc. The whole interface is subtle, elegant and incredibly easy to navigate using a controller. In fact, In some respect it’s actually easier to use than the 360 or Ps3. The software keyboard, in particular, is a master stroke.  Overall, the cleanliness is refreshing. I love the fact that it’s fully focussed on my gaming library and profile, without any extraneous monetised clutter.

Now how does it score on Compatibility? I thought I’d test it out with 3 different games. My first experiment was with a game you would expect to work perfectly: The recent port of console title Arkham City. 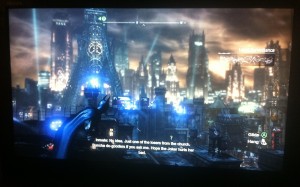 Unsurprisingly, it worked without issue: Launching from Steam took me straight into the game exactly as it would on a console. The only difference, of course, was that it looked a lot better! I may only have a relatively humble GTX 660, but the game runs at full speed with detail settings that would probably be comparable to an Xbone/PS4 version. The only hiccup was Windows itself, which decided to butt in to suggest switching to the basic Windows 7 theme halfway through my session, for some reason. A quick alt-tab got me straight back into the action though. Hurrah! 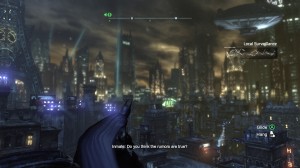 My next test was good old rogue-like strategy title FTL. Unsurprisingly, this didn’t turn out quite so well. There was slight clipping at the borders of the image (which could definitely be resolved from the options screen) but the game features no controller support as it stands. If i had a wireless/bluetooth mouse it would have been fully playable, mind you. 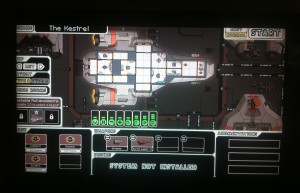 Shame, FTL looks lovely up on the TV

So then, my final test: There are hundreds of boxed PC titles which are available for pennies. and can be added to your Steam library by creating a short-cut, but how nicely do they play with Big Picture Mode? For this test I opted for an old favourite of mine: Outrun 2006. 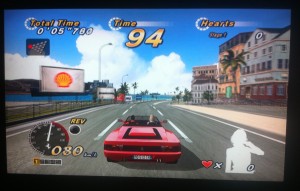 Outrun both up on the TV and looking better than ever!

Thankfully, it seems that even older titles are fully compatible. Not only did Outrun take to the controller perfectly, but it looks absolutely stunning when running at max – far better, in fact, then the cut-down Arcade versions that used to be available on PSN and Xbox Live stores. Hurrah! 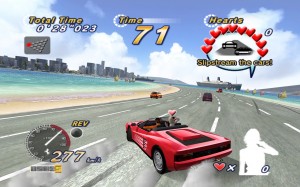 Did i mention you can take screenshots straight from Steam?

So then, I can’t really think of a single reason to take a ‘proper’ console over big picture mode. Not only does Steam have a massive library of cheap, classic titles that can easily be made to look better than their console counterparts, but it needn’t work out that expensive. You can pick up a decent processor, 8gb of RAM and a reasonable graphics card for the price of a PS4, so if you only needed one or two of these components it should work out a bit cheaper cheaper. Sure you may lose out on one or two of the ‘exclusive’ titles, but it isn’t as if the PC world is lacking for FPSs or Racing Games. I’m sure that, eventually, the new consoles will gain decent libraries and sort themselves out – but why wait? As much as it pains me to say it, the PC can give you better, more reliable hardware at a cheaper price today.

Now all i need is a cheap, less power-hungry box to stream media stuff from. About that Ouya. . .