With the family packed off an the turkey completely devoured, now’s the time to generally start getting stuck into the Christmas games. Hurrah!

No no, not games set at Christmas (although there are some that were definitely worth a mention,) this is about games received during the joyous Christmases of yesteryear. In this instance we’ll have a look at Hard Drivin on the ZX Spectrum (Christmas 1989) and E-Swat on the Master System (Christmas 1991.) So then,what connections are there between Sega’s answer to Robocop and Domark’s attempt to create an ultimate driving sim? Well, aside from both being based on incredibly awesome arcade machines, they were also games that shouldn’t really have been readily replicable on 8-bit hardware. Hard Drivin, in particular, is a technical masterpiece: 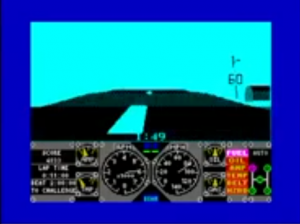 Yep, from a full-colour title screen through to the brutal crash replays, all of the Hard Drivin arcade experienced was somehow crunched down and squished into the Spectrum’s 128k memory pool:  Loop, bridge, banked curve and cracked windscreen  included.

Sound a bit too good to be true? Well, it is clear that a number of sacrifices had to be made. The frame-rate chugs along at around 8fps, and drops if things get a bit busy. On top of that, The short draw distance and monochromatic blue colour scheme are also more reminiscent of a murky Welsh hillside than the sun-kissed vistas of the original.  As technical compromises go, that’s not bad mind you. It was streets ahead of the C64 version at least. 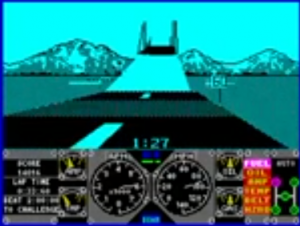 So just how good was Hard Drivin? Actually it was terrible. Technical aspects aside, the actual game isn’t very good. The major problem, oddly enough,  seems to be be that they stayed too faithful to the arcade original.

You see, The Hard Drivin’ cabinet was fitted with a chunky mechanical steering wheel and gear stick, which were spring loaded to act like the real thing. This means that the original Hard Drivin team didn’t need a software solution to make the wheel, pedals or steering wheel snap back to neutral in the way you’d expect when driving. As this code wasn’t in arcade Hard Drivin, the programmers didn’t think it belonged in the speccy either. Oops. Consequently, this means that to stand any hope of completing a relatively gentle right turn, you have to turn had left to get the steering centred again. Oops.

See a Vid with me trying to wrestle my way around the Hard Drivin’ stunt track here: