Now that arcades are little more than a historical footnote, it seems a bit strange that the home ports of Outrun were as a MASSIVE, MASSIVE deal. They were though. If you looking at the reviews from the time, there can be no doubt that the 8-bit outruns were among the most eagerly awaited games of the year.

Which was a shame: If there was a game that was that was designed to be unportable to tape-based machines, it was probably be Outrun. By the late 80s, Speccy developers had become quite adept at squishing flashy 16-bit visuals into tiny monochrome sprites, but Outrun’s reliance on choice seems, at a hardware level, beyond anything the Speccy’s sequential tape drive could deliver. Developers Probe had a choice:  either ditch both the open-ended structure and the spirit of the original, or turn the tape into a nightmarish labyrinth of multi-loading hell. Eek. 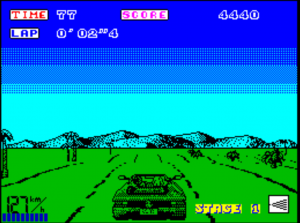 Guys, why was the beach stage green? 🙁

Ingeniously, Probe found a third option: while each level had to be loaded into memory as the player chose it, somehow they were able to keep it there on subsequent play throughs. Not quite as fluid as the original then, but not a bad compromise either.

In fact ‘Not a bad compromise’ pretty much sums up the spectrum port of Outrun. Though the third of the games iconic music tracks, passing breeze,was dropped; the port features impressively accurate renditions of magical sound shower and splash wave. These alternate from one level to the next, which is a surprisingly elegant solution when you factor in the multi-loading (the game also came with a second cassette which featured a recording of the arcade soundtrack.) 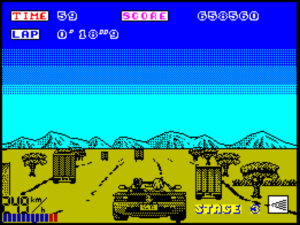 See! This stage is yellow. Why couldn’t the first stage be yellow?

On the graphics front, Probe were (obviously) working with a much reduced colour palette. Aside for a dodgy monochromatic green used for the games opening beach-side track, they use the palette to full effect, switching around the colours to give an impression of travel that the reduced track-side complexity would fail to convey on its own. Ingeniously, this reduction in complexity didn’t apply to the cars as well. Yes, the iconic red Testarossa might be reduced to a sinister shadow, but at least the detail’s are clearly distinguishable – copyright-bating prancing horse included.

In fact, pretty much the only thing that lets Speccy Outrun down is the frame rate. At the best of times it’s hardly silky, which unfortunately means it grinds almost to an almost complete halt on the more complex stages (which Probe, to their credit, tried to recreate in full.) This is compounded by the stupidly long skiddy-crash animations you’re forced to watch every time you come into contact with anything (including the suicidal npc cars,) which conspires to make the whole experience much more frustrating than it really needed to be.

Speccy outrun was a pretty good port, then. The more advanced features may have been lost in translation, but the core experience made it through  pretty much intact. It wasn’t arcade Outrun, but it was never going to be. Could they have done any better? This question was answered by the next game in the series, Turbo Outrun.

Next Page: a Ferrari F40