Turbo Outrun arrived a couple of years after the original. On the surface it had a lot going for it. Not only was it made by some of the same team as the original, but they’d actually worked on a second game in between, Outrun Europa,  which was axed at the last minute for a port of Sega’s arcade sequel.

On top of that, Sega’s sequel was more Spectrum-friendly than the original Outrun: While the original was all about care-free cruising and player choice, the American-themed sequel was an intense linear duel between the player’s Ferrari F40 and some goon in a Porsche. This duel was helpfully divided between four groups of four stages, making it perfectly suited to multi-loading on the Spectrum. 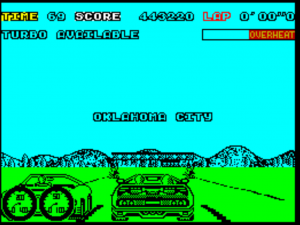 People of Oklahoma: This is what your countryside looks like

Thankfully, the developers had learned a bit from the mistakes made with the original Outrun. Feeling generally optimised, and with a reduced draw distance, the game is capable of providing a much smoother experience than the first port.

Unfortunately, there’s a big ‘but,’ and it’s linked to the word ‘capable.’ you see, as with the original, the team were guilty of the (admirable) charge of trying to get too close to the original arcade game. Alongside the beautifully detailed player sprite, the tracks are littered with jeeps, lorrys, tumbleweeds, bollards and  impressively huge and detailed scenery objects. While it’s heart-warming to see the Spectrum processing such detailed environments, they do have a habit of slowing the game down to a complete crawl. In fact, in some places its worse than the original Outrun port: not only does the game slow down, but the controls can become unresponsive, easily trapping you in an incredibly stupid-looking suicidal death-swerve. This is irritating, but not game-breaking. 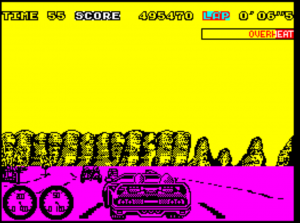 A little known fact about the Grand Canyon is that it’s completely pink.

Sadly, Spectrum Turbo Outrun was a commercial flop, which was a shame. The arcade sequel may not have been as fondly received as the original Outrun, but it’s still a fantastic racing game (vaguely misoginistic message aside.) Even with slowdown, the Speccy version is still supremely playable to and even boasts a catchy original soundtrack to boot.

The final Sega arcade sequel, Outrunners, wasn’t too arrive until a year or so past the Speccy’s sell-by date. However, US Gold still had their cancelled ‘Outrun Europa’ project up their sleeve. Whatever became of that I wonder?

Next Page: A man on a bike