You’d think, with Turbo Outrun having under-performed commercially, Us Gold may have been tempted to bundle up their completed Outrun Europa prototype and have it sitting on the shop shelves faster than you can say ‘Magical Sound Shower.’ Instead, the game was rebuilt from scratch and a title that started as a cynical cash-in ended up as an ambitious Spy Thriller that pushed the 8-bit machines to their limits.

The competitive nature of Turbo Outrun seems like a big departure from the care-free nature of the original, but Outrun Europa pushed things much further. Cast as a vaguely incompetent spy who has to recover both his red Ferrari AND some important spy-related documents, Outrun Europa doesn’t just feature the strict time limits found in Outrun and Turbo, but the player also has to fend off both local police and dastardly enemies who both wish to ram them off the road. 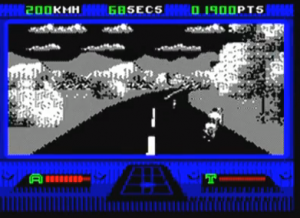 On top of this, the player also has to get used to driving multiple vehicles: Beginning on a high-powered motorbike in London, you’ll switch to a jet ski and a number of different cars as you progress through the chase. If that wasn’t complicated enough, some vehicles also feature weapons, while others are equipped with collectable turbo boosts.

Sounds a bit complicated for a Speccy game, doesn’t it? Well, the designs for the visuals were every bit as impressive as the lofty concept. The Master System version, for example, features scenery which is almost Megadrive-esque in quality. 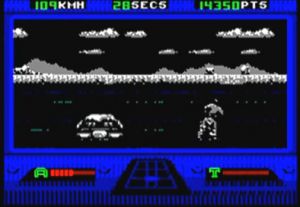 Out of my way greyscale Speed boat!

Obviously then, something had to give. In this case, it was the graphical quality. Made by some of the same fellows as Turbo, the compromises made in Europa consequently went in quite a different direction to the previous arcade ports. Where Outrun and Turbo had focussed on chunky sprites and scenery, Europa focussed on performance: The controls were much more responsive than in the previous titles, and the scenery flows by at a reasonably fluid rate too. Hurrah.

This focus on performance, however, means that the game looks atrocious: Rendered in depressing shades of grey, the visuals look like they’ve been created by a dodgy dot-matrix printer, with individual pixels clearly visible on screen. This may have not been a bad thing in itself, but unfortunately a preview in Your Sinclair (and subsequent review) featured chunky, full-colour graphics. This of course meant that anyone who had seen these early builds would have been understandably miffed with the final product.

Which is a shame, as despite the slightly crappy graphics Europa is still a technical marvel. While Outrun and Turbo features decidedly choppy transitions between stages, it’s incredibly impressive how the programmers managed to effortlessly swap ‘London’ for ‘Kent’ and allow you to slowly transition from open water to the French coast. The amount of hills and tight corners is also remarkably impressive. On the technical front, Europa was close to being  a masterpiece.

The same cannot be said about the gameplay though. Not only was the difficulty level probably on just the wrong side of taxing, but the shared handling models meant the game couldn’t fully deliver on its multiple vehicle promise. Still, i think its hard to argue that, based on ambition alone, Europa isn’t a fitting swan song to the Speccy Outruns.

Next Page: Wrap up