Do you remember Review A Great Game Day 2013? No? That’s ok. It was a while ago (a year, in fact) and a lot has happened in the interim. So then Last year, I chose to review the rather tremendous Speccy Beat ’em up Target Renegade, but it was a very close run thing. You see, I almost opted to look at another classic Spectrum title, Hijack, so why don’t we take a peek at that this year, eh?

On the surface, Hijack looks like it belongs alongside the multitude of flip-screen adventure games that litter the Spectrum library. These titles were the spiritual forebears of the Point’n’click genre, tasking the player to explore exotic locales in order to find a number of weird and wonderful items that were needed to solve a series of increasingly obtuse puzzles. However, though Hijack made use of the same flip-screen design, at it’s core it was a very different beasty. Rather than an adventure, creators Paradise Software somehow took the core game play mechanics but shoe-horned in a complex and involving political simulation. 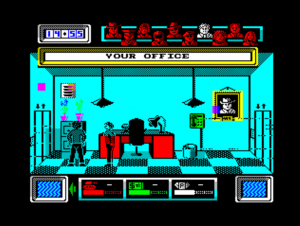 The plot and objective of Hijack is relatively straightforward: There has been an old-school 80’s style hijack and, as the official in charge of the Pentagon’s Department of Hijacks, it’s up to you to work out how to resolve the situation in a way that keeps the President on your side and the hostages’ brain matter intact. Sounds simple, eh?

Except, it isn’t. The game may fit inside 48k of ram, but it tracks a lot of independent factors that the player has to control.  It’s not enough to merely work out who the hijackers are and what their motivation is, you have to make sure that a constant stream of information is made available to the press and that foundations of a resolution (be it through raising funds or sending commandos to the scene) are laid.  Alongside this, you may also have to track down an information leak within your department while constantly making sure you maintain the confidence of the president – he has the final say on whether you get to fly out to finally resolve the hijack. 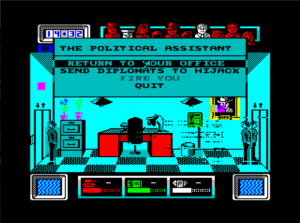 Freaky clone minions! Do my bidding