If that wasn’t enough, the whole thing takes place in real time, and this is what makes Hijack a truly ingenious and brilliantly evil game: First up, You have just 15 real-time minutes before the Hijacker’s deadline has past. This forces you to weigh up the cost/benefits of everything you do. The CIA agent might be able to give you all of the information you need about the hijackers, for example, but asking him to produce his fullest/longest report will take 12 minutes. Leaving you with just 3 minutes to act.

On top of this, you can only issue orders to advisors physically in the same room as you, so even when you know what you need to do, getting it done is often easier said than done (apparently, In the 80’s no one knew how to use their desk phones.) The game helps you to an extent  – though the characters wander around the building, each has their own office and there is a roaming secretary you can use to track down errant advisors – but this definitely adds a random element which, along with the various hijack scenarios, adds an impressive amount replayability. 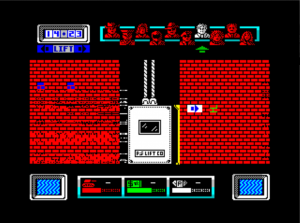 a lift. You’re going to see a few of these.

As Hijack is a Spectrum game, you can see that a number of compromises have been made: There isn’t much in the way of a sound track, and eerily everyone in your department seems to be a clone of your sprite (you can only tell who’s in the room with you by looking at the row of lit/unlit portraits at the top of the screen.)

Still, I have a massive  soft spot for this game. In light of the recent success of titles like Papers Please, its clear that Hijack was a game well ahead of its time. However, if the concept is intriguing and surprisingly modern, the gameplay is decidedly retro: If Hijack were to be remade today, it’s obvious from the outset that it would be a completely different. After all, considering the need to control an entire department, producing a third person adventure game makes no sense whatsoever. 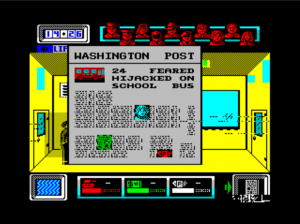 The Washington Post lets you know if the press think you’re doing a good job.

But I love Hijack because rather than despite this genre mismatch. Yes, roaming offices and lift shafts desperately looking for your military advisor or the code you need for the records computer can be a tad frustrating, but these frustrations are reminders that Hijack hails from a time when the generic conventions we know and love were just starting to be codified. Hijack is a brilliant and inspires original and I doubt you will get another chance to play anything like it ever again – So why not give it five minutes of your time, eh? Don’t worry if you don’t want to though – unlike the hijackers I won’t hold a gun to your head or anything.