The term 3D is never a welcome appendage is it? While the visual trickery might be novel and fun, it’s generally a warning that gimmickry has been used to mask a product of rather dubious quality. Crumbs.

Thankfully, This isn’t the case with Outrun 3D. Turn the 3d mode off (which is as simple as pressing pause on the title screen) and you’re left with what is  surely the finest 8-bit Outrun. 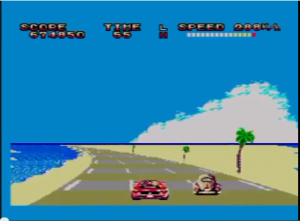 Strange as it seems, having the coast marked a dramatic improvement over the original.

That’s not to say that there was anything particularly wrong with the original MS outrun (it was a very
accomplished port) but everything about 3D is just that little bit more polished: the colours seem that much more vibrant, the scenery is both more voluminous and more detailed, and they’ve even squeezed in some advanced effects like tunnels and weather.

Thankfully, this seems to correspond to the gameplay too. Along with a frame rate that seems a little brisker, your Ferrari feels just that little bit more responsive.

It has weather! WEATHER!

On the negative side, only Magical Sound Shower remains from the original Outrun soundtrack which is a shame. But even then, newbie tracks ‘Color Ocean’ and Midnight Highway’ are both solid tracks which, surprisingly, match the game as perfectly as Splash Wave and Passing Breeeze. Best of all, Sega even went to the bother of ensuring that the cart contained FM versions of the new tracks (for those lucky enough to have the expansion.)

Add onto that a sound test and selectable difficulty levels, and there is quite literally no reason to opt for the original MS Outrun (aside from maybe price. Ha!) It’s just a shame that not all the other Outruns could be this good, which brings us neatly onto our next Master system entry: Battle Outrun.