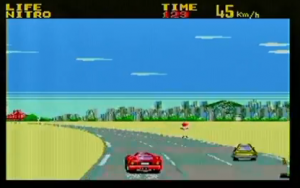 This game is sponsored by the colour yellow

The old “It’s like (x) crossed with (y)” might be the laziest form of games journalism going, but there seems to be no other way of describing Battle Outrun. The game, essentially, borrowed the hi-octane car chase-based gamely of Chase HQ and added the thinnest of Outrun veneers to the presentation. Chuck in a simplified version of the map from Turbo Outrun and the nifty upgrade lorries from Spy Hunter and you have described everything Battle Outrun has to offer. 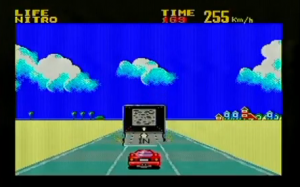 if there’s a saving grace, the Spy Hunter style trucks are it.

Not that’s necessarily a bad thing, of course. Battle might score poorly in the originality stakes, but all of its inspirations were great games in their own right, so there’s nothing to stop Battle joining their ranks. In theory, anyway.

Sadly though, the designers opted to carry this laziness over from the design to the execution, leaving us a game which falls short in every single area. Though the map screen gives you a choice of 8 very different American locales, they all share the same bland shade of yellow for the foreground (even city-based stages like Chicago and New York,) Every stage features the same hazards (jumps, road blocks and oil slicks) and the only trackside scenery found in any of the stages is an occasional chevron. There’s only type of civilian vehicle in the game, and it only has two different movement patterns (one type is slow and stationary, the other veers drunkenly from side to side.) 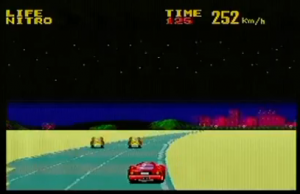 Why yes, those are exactly the same cars. On every level.

Even these failings may be forgivable if the game played ok, but the handling model never feels quite right and the whole thing gets very repetitive very quickly. It also feels a bit weird that the best way of overtaking traffic is generally to veer into the empty space off the sides of the road. It should be noted that the challenge ramps up massively in the later stages of the game, but this isn’t a positive thing: The challenge stems largely from the target car’s ability to glide, ghost-like, through impenetrable walls of traffic.

If there was one saving grace, It’s noteworthy that you have the option to change the back ground music before you drive, but none of the tracks are particularly memorable and, unlike in Outrun, they didn’t even bother to name them. Blimey.

With a game like Battle Outrun, it’s tempting to conclude that it’s for fans of the series’ That really doesn’t apply here though. There ‘s simply nothing here for anyone who enjoyed either Outrun or Chase H.Q. The entire experience feels rushed, underdeveloped and, to be frank, just isn’t much fun. I’ve had to play it but you don’t. Save yourself. Please.

Luckily though, our next Outrun fares a little better.