As the Megadrive received complete (if imperfect) ports of both Outrun and Turbo Outrun, it looks like there was less of a need for Sega to develop other Outrun titles. There were just two other Outruns on the Megadrive, and the first of these, Outrun 2019, wasn’t even supposed to be either a Megadrive game or an Outrun game at all! 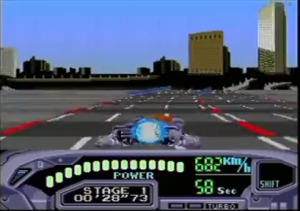 Originally developed for the Mega-CD, Outrun 2019 began life under the moniker ‘Cyber Road.’ Moving to the Megadrive under the new-name ‘Junkers High,’ it was eventually released under a title reflecting its futuristic setting: Outrun 2019.

So, does a title with this futuristic setting deserve to be considered as an Outrun title? Yes, definitely. Though it may contain the sort of neon-dripped futuristic cityscapes the name would have you expect, the game also contains the kind of ruins, forests and natural European-style landscapes you’d expect from an Outrun game. With the iconic red Ferrari having been replaced with a futuristic rocket-power monster mobile, this makes for an interesting juxtaposition. 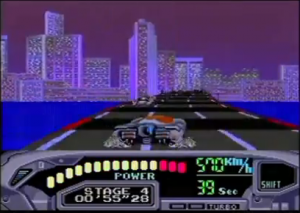 As the name suggests, there’s lots of futuristic city scales…

Indeed, out of all of the Other Outruns, this might be the best of the lot. Not only does it crack along at a nice pace (even on a 50hz Megadrive) but none of the changes to the Outrun formula feel ornamental: jumps, so pointless In Battle Outrun, allow you to leap over roadless sections of the track and access raised flyovers while the automatic rocket boost feels much more indispensable then the boost found in Turbo Outrun. On top of that, the predictable handling model feels fun and satisfying, shadowing the changes that were to be made in the future arcade Outrun titles. 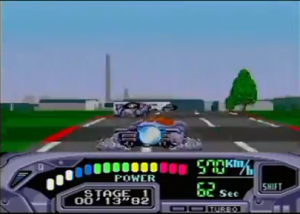 But there’s plenty of traditional outrun style tracks too!

Most importantly, however, this was the first Outrun after the original to include a feature which has become synonymous with series: a forked track layout! Ok, so the layouts themselves may have actually owed more to Taito’s Outrun rip-off Full Throttle then to Sega’s original, but they’re definitely a welcome return. As the game included 5 tracks with multiple forking paths, this added bags of replayability to a game which was already as addictive as any coin-op.

Speaking of things synonymous with Outrun, though there might be a clearer EDM influence here, the music in 2019 definitely feels sufficiently Outrunesque too, and completes an outstanding package. It may not have began life as a true Outrun title, but the end result is something which can be considered among the best of the 16-bit racing games. If you’re going to hunt down just one game from this article, please make it this one. You won’t regret it.

Finally, lets look at an Outrun title that never even made it to Europe. Crumbs.