As Other Outruns go Outrunners is a bit of an oddball, as it was based on an official Sega arcade game. Outrunners deserves to be considered a mainstream Outrun title then, surely?

Sadly both the original arcade game – and the Megadrive port – seem to be the runts of the Outrun litter. Appearing in 1993, the Outrunners arcade game was perhaps doomed before it even began. Though it marked the apogee of 2D sprite scalers thanks to its use of Sega’s fancy System 32 hardware, it’s impact was inevitably lessened by having to share arcade space with Sega’s fancy 3D model 1 (and later model 2) games. 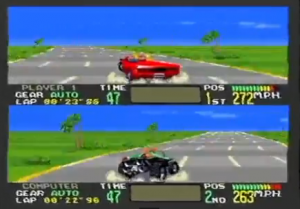 The Split screen is very difficult to get past

This was a shame, as Outrunners was a pretty forward-looking game. Not only did it reintroduce and expand upon the explorative and light- hearted nature of the Original Outrun, but it nailed-down the slidey high-speed handling that would make Outrun 2 such a success. It also included an impressive 8-player link mode. Thankfully, though Outrunners may have Been doomed to powerslide into the cracks of public memory in the long term, it did manage to build up a reasonable following at the time. This ensured that it would receive a home port. 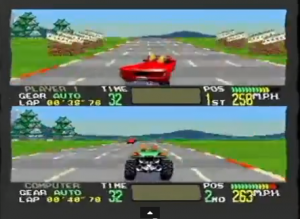 Sadly though, Sega didn’t handle the Megadrive port themselves. Instead they farmed it out to Data East. Not a good start. However, to give  Data East credit, they managed to cram all of the major elements in here. Not a mean feat considering that Outrunners had the most complicated map of any Outrun title, changeable in-game music and a large selection of cars. They even managed to cram in a console-exclusive ‘original’ mode, which sees you face off against the other Outrunners in 1-on-1 single-stage battles, and included a whole load of little graphical details like an Orca that ambiently swims in the tunnel stage.  Hurrah!

Even the handling, which is another potential pitfall, feels in tune with the arcade. In fact I may actually prefer it: the slideyness actually feels even closer to Outrun 2, which of course means it comes pretty close to arcade perfection. On paper, then, Outrunners is actually a pretty good game. 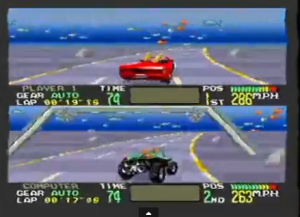 Look! it has an underwater tunnel and everything

‘So then, what’s the snag?’ You may be asking. Well, err, it’s split screen. All the time. Even in One Player mode. I’m not sure if this was done for a technical reason (perhaps they thought that smaller sprites was the only way to recreate something that approached the visual standards of the System 32 hardware?) or if Data East were so enamoured with the arcade’s multiplayer they thought that it could ONLY be played in multiplayer. Either way, this was a colossal mistake. From FM recreations of a surprisingly sample-based soundtrack, to the impressive attempts to recreate every detail of the Outrunner’s cars,  Data East’s Outrunners is a brilliant port but it fails by default. If you get past the split screen i can guarantee that you will have some fun, but the split screen is a very difficult thing to get past. Oh dear.