Maybe its just me, but there’s few gaming things more exciting than an import-only game. From the feeling exclusivity, to the illicitness of owning something you were never supposed to own, nothing quite beats it. It does beg the question though: why weren’t these games released over here in the first place?

For Japanese-only titles which have huge blocks of text and racy cultural references that would make the average Western eyebrow go all Roger Moore, the answer is obvious. However, when games reached the US but failed to cross the Atlantic, things are a bit harder to fathom. A good example of this is Chase HQ II. 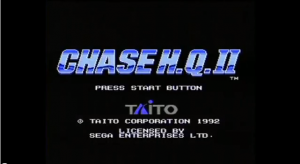 Released as Super Chase HQ in Japan and as Chase HQ II in the US, the game was a sequel to a hugely successful arcade title that was ported to everything from the Spectrum to the Amiga. Like the original, Chase HQ II is an Outrun-alike that focuses on the escapades of a  US Police Department that opts to waste lots of public money on using expensive and highly-powered vehicles as mobile battering rams. Each stage sees the player tasked with catching up with a different criminal vehicle, and then mashing them off the road.

In fact, for anyone who knows the original, the only major alteration in the sequel is the choice of additional vehicles. Rather, than merely being forced into a copyright-baiting sports car,  you’re given the choice of a slow but unstoppable lorry cab, or a middling 4×4.

So far so good then, but this is where things can go downhill very quickly. And there are definitely some problems: Multiple vehicles are a great idea in theory, but there aren’t really any situations where the new additions feel needed. In fact, the cab is generally more of a hindrance than anything else: generally, its low top speed tends to prevent you from closing to a distance from where your awesome SMASHING powers can be put to good use. On top of that, most of the stage layours and backgrounds feel like they were nabbed from Taito’s ‘Special Crime Investigation’ (which, bizarrely, was also known as Chase HQ II.)

He’s got a shooter! Thankfully, the bullets are almost completely harmless

However, once you get into it, the game isn’t actually that bad at all. The framerate moves along at a fairly nice pace (even on a 50hz MD,) and the backgrounds are varied and detailed. While the scaling animation doesn’t feel quite right at times, the handling is responsive and predictable. Careering into your targets also feels just as chunky and satisfying as it did in the original arcade game. It’s actually quite good fun.

Sure, the music’s a bit forgettable, it’s incredibly short and and (as with the SCI Arcade game) there’s an absolutely infuriating difficulty spike halfway through that will have you wanting to boot the developers in the crotch, but mone of these things were really that uncommon on the Megadrive. From a quality perspective, there isn’t a reason why this wasn’t released but Sega’s own slightly ropey Turbo Outrun port was. Strange.

As with the original, Nancy’s always on hand to tell you which criminal needs Boshing

Is it worth tracking down now? That would depend on how much you like either your driving games or the Chase HQ series, I suppose. The whole police chase aspect is still relatively novel, but otherwise Chase HQ II is pretty unremarkable in almost every single department. Despite this it’s definitely a lot of fun though, and it will definitely provide a good Chase HQ hit for anyone who lacks a Spectrum or PC Engine or who simply can’t be bothered to sort MAME out. As novelty import import titles go it’s also very cheap too, if not one to go out of your way for though.

Alternatively, if you fancy saving your cash, you can see a complete playthrough here: