The internet community’s a funny old thing isn’t it? In the old days, the only options you had for judging a game’s overall popularity were ELSPA charts and magazine reviews . Nowadays, even the most obscure titles have fan pages, gamefaqs entries and Youtube videos.

Needless to say, more often than not you find out that an obscure game you thought your sole dominion is a cult classic with hundreds of followers.

Much more interesting, however, is when you find out that one of your cherished games is a hated pariah.

For me, one of these titles is the Megadrive version of Hard Drivin’.

Originally released into the arcades in 1988, home conversions were always going to be based more on financial rather than technical sense: Not only did the cabinet feature an impressive custom chipset designed to chuck arousnd fancy 3D polygon-based worlds, but the exterior featured an impressive cockpit that included a force-feeback-enabled sterring wheel, gearstick and three pedals. Oh dear.

Get ready for the jump!

Nevethlesss, in 1991 a Megadrive version arrived, sans dedicated 3d hardware and fancy tactile controls. According to the internet, this is one of the worst games ever created: Too slow, too hard and with terrible handling, this port is apparently too rubbish for anyone to bother with.

But let’s back track for a second: is the original Hard Drivin’ arcade a game that anyone should be interested in today anyway? As one of the first 3D driving sims, it’s undoubtedly a worthy museum piece, but does the gameplay serve up anything different from other early racing sims?

Surprisingly, Hard Drivin’ actually serves up less than your average sim. A lot less. In fact, Hard Drivin’ lacks the bare minimum we would expect from any sort of racing Sim today: There are only two tracks, just the one (fictional) car and the game is completely devoid of any realistic races or time trial competitions. Crumbs.

Weirdly, however, this fundamental lack of content actually seems to be a major benefit for Hard Drivin. The original tagline sold it as the ultimate Driving simulator – not the ultimate racing simulator. With all of these distractions removed, the focus is set much more clearly on the thrill of the act of driving itself.

Is this a bad thing? no – A driving sim shouldn’t be about beating the opposition by any means necessary or unlocking hundreds of cars: it should be about hitting the corners at the right speed and with the right line. And that’s just the experience that Hard Drivin’ delivers, and delivers well.

This intense focus is further reflected in the game’s rather bizarre structure. In the main portion of the game, the player’s one and only goal is beating the record lap time. Though beating it unlocks a 1-on-1 showdown with the ghost of the record holder, this showdown isn’t triggered automatically. The player still has to run the clock down first, effectively leaving them free to continue playing for as long as they want. Well, as long as they can keep setting decent lap times, of course. Racing games may be ten a penny both back then and today, but once again there are a few games as focused on the actual Driving as Hard Drivin’.

The game’s structure isn’t the only thing that’s novel about it either. Another wonderful thing about Hard Drivin’ is it’s bizarre, abstract game world. Of course, When your entire world is constructed from a small number of filled polygons it’s impossible to be anything other than abstract – but Hard Drivin’ takes this a step further.

By combining design elements of enclosed race tracks with those of open road ways, the developers created an impossible and highly original space where a speed track has an oncoming lane and where large vans can attempt a loop-de-loop. It’s bizarre by any standards – even those of 80’s arcade games – and well worth a visit. Only if you play it once.

So Hard Drivin is a bizarre and individual game, but what about those hard-hitting criticisms of the Megadrive version?

Well,Those criticisms aren’t entirely fair. Though it’s true that the sound’ a bit dodgy, and the frame rate’s definitely a little on the slow side, Hard Drivin’ is a technical marvel. You see, The 16-bit consoles simply weren’t designed with polygons in mind. The machines simply didn’t have the grunt to generate full 3d worlds. This is why the likes of Starwing and Virtua Racing needed extra 3D hardware to be baked into their PCB in order to work. 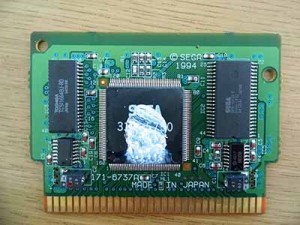 Released only a couple of years into the Megadrive’s life, Hard Drivin’ was in fact one of only a handful of 3D 16-bit releases that made it onto the market using only the stock hardware. How was it possible?

According to Sega-16’s interview with developer Lee Actor, it wasn’t easy:  they achieved it via a complex process of turning polygons into Bitmaps, and then converting the bitmaps to a format the Megadrive was able to render. Which was pretty clever, I’d say.

Cleverness aside, was it justified to release the game with such a blow having being struck to its overall nippiness? I’d say it was. For a start, it’s worth remembering that for many of us the clunky Megadrive version actually represented a speed increase! Though I’d been lucky enough to see the arcade in action at a local swimming pool, most of my time had been spent with the ambitious (but limited) Spectrum port – and many others would have been coming from the abysmal C64 port. As the frame rate in these versions barely touches double figures, the Megadrive represented a big boost in both frame rate and graphical quality.

Along side this, it’s worth remembering that Hard Driving was one of the first games to give many of us a glimpse of the benefits of a 3D world. Crash Cams and instant replays may be standard features today, but back in 1991 the ability to see your demise from a second angle or drive under the Stunt Track while racing on the game’s Speed Track was absolutely awe-inspiring. At the time, a slightly slow experience seemed like a worthy compromise for such futuristic-seeming features.

The attacks on the games handling model also seem a little unfair. The game definitely has its limitations: the physics can only model two wheels and the brakes aren’t effective enough, but what it does have is a strong degree of internal consistency.

Sprite-based simulations (such as the excellent early Test Drive games) might have been good fun, but there always seemed to be a degree of arbitrariness in the collision detection and car handling (probably due to the dimensions of the sprites not quite matching the dimensions of the ‘real’ object,) and this is something the three dimensional world of Hard Drivin avoids perfectly.

driving under the bridge. In 1991, this was serious business.

On top of that the handling is (relatively) spot on. Though the car’s attributes are arguably more akin to a Vauxhall Astra than a Ferrari F40, the game rewards good driving. Which is fundamentally all you want from a sim, isn’t it? If you gun it into every corner, you’ll spend most of your time skidding around in the rough. If, however, you stick to each corner’s recommended speed until you’re comfortable enough with the track (as you would on a real race track,) you’re pretty much guaranteed to set increasingly competitive lap times.

That’s not to say it’s without it’s irritating flaws: as the traffic is pretty random so you’re bound to inevitably find a slow-moving van in the middle of Loop-the-Loop attempt eventually, and you’re likely to crash into the odd invisible wall occasionally too. On the whole, however, Hard Drivin is both predictable and masterable. If you are sliding off the road and crashing consistently , this is your fault. Not the game’s.

So overall, Hard Drivin’ is a game that’s well worth your time. Admittedly, the arcade version is the one to go for, but in its absence the Megadrive version is a worthy substitute (as is the Japan-only Sega Saturn version, which comes complete with texture maps and awful Midi soundtrack.)

So do you love Hard Drivin or Hate Hard Drivin’? Think you can beat my record lap time? why not leave me a note in the comments!