Is it that time of year already?  four months ago we looked at a truly great game, so now it’s time to look at something utterly dreadful. Blimey.

My nomination for this year’s review a bad game day is 1985 Spectrum title “Give My Regards To Broadstreet”, a game based on a long-forgotten Paul McCartney film of the same name. 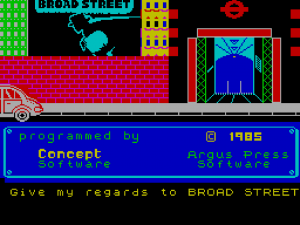 The title screen. It leaves you not suspecting the horrors within

As you probably haven’t seen the film (not many people have!) the plot for both game and film involves some gubbins about Paul McCartney having to recover missing master tapes for his new album (thanks Wikipedia.) Intriguingly however, the developers decided against turning McCartney’s quest into a fashionable flip-screen or isometric platformer. Instead, they opted for the braver option of creating a game that is, well, tantamount to a stalking simulator.

You see, Paul has twenty four hours to recreate the final track from his new album. If he fails, a shady loan shark will call in his debts and gain ownership of his record company (quite why someone as loaded as an ex-Beatle needs to go to a loan shark I’ll never know.) Rather than simply rewrite it himself, Paul (well, you) has decided that the best way to recreate the track is to crib the chords from the memories of the people present at the recordings, even though they’re scattered all over London.

Rather than, say, give them a ring on the phone or pop round to their house for a chat, the only way Paul can contact them is to drive around town in his slightly rubbish-looking McCartney-mobile and ambush his chums as they leave one of London’s iconic tube stations. He (well, you) have to do this while avoiding clamp-happy traffic wardens and dodging cars driven by the loan shark’s kamikaze thugs. Crumbs.

Actually, that doesn’t sound too bad does it? And that’s not the best bit either. Viewed from above, the game gives you the freedom to roam around a reasonably detailed recreation of the whole of central London. Starting off at Abbey Road studios in the north west, if you want to zoom down to Vauxhall in the south or across to White Chapel in the east, it’s entirely up to you. Such freedom is impressive in any era, but it’s always amazing to see in a humble 48k Spectrum game.