Now, in mitigation, it’s worth remembering that Give My Regards to Broadstreet isn’t a modern game. Its a mid-80’s game. Generally, 8-bit games were more happy to be manual-dependent than games from our own massively over-tutorialised era, so is Give My Regards to Broadstreet a good game that has been misunderstood by us impatient modern gamers? No. Not only was it universally panned by the Your Spectrum Joystick Jury, but even the more favourable CRASH review noted the problems we have looked at above. This was not viewed as an AAA title back in its own era.

A further excuse then: Was the visionary game design realistically beyond anything the Spectrum was capable of technically? No. The Spectrum would go on to host many more open world games (like Turbo Espirit) with some even boasting 3D vector graphics (like Mercenary.) Technically, Give My Regards to Broadstreet attempts nothing that isn’t done better else where. It is, I think, indisputably a stinker. 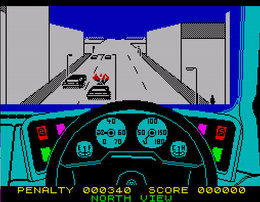 Turbo Espirit. You should probably play this instead.

But, it is at least an interesting stinker. The likes of Turbo Espirit may have gone on to do Open World a whole lot more proficiently, but Give My Regards to Broadstreet was first. It should probably be respected for that.

It is also worth remembering just how daring and visionary game it is: it really IS refreshing to see a licensed game that has its gameplay elements constructed around the constraints of the license, rather than having the licensed material unceremoniously trimmed to fit existing gameplay mechanics. Good or bad, Give My Regards to Broadstreet is clearly an important game.

But, when push comes to shove, being important, visionary, brave or daring doesn’t matter if the gameplay on offer is utterly utterly woeful, which this is. Give My regards to Broadstreet is unarguably a great museum piece, but a museum is where it should ultimately stay, far away from the tape decks of any unsuspecting modern gamer.

What do you think of Give My Regards to Broadstreet? Why not leave a comment below! Don’t fancy leaving a comment? then why not follow me on Spotify or listen to one of my lovely sample tracks over there on the right? go on – you know you want to!