With all the talk of ZX Spectrum related stuff on here lately, why don’t we take a look at another Speccy classic: Streaker.

First a shocking admission. We didn’t actually own an official copy of Streaker over at Fatnick towers. Our copy was an illicit one that lived on one of those wonderful old TDK cassette tapes. I’m sorry. Weirdly this probably enhanced the experience. You see, Streaker is the kind of bizarre and vaguely deviant title you could only really find in the colourful and slackly-policed world of the 8-bit computer, so having an illegal copy felt like the right way to go about things. Today I would give five year old me a proper dressing down, of course.

Anyway, unleashed on the world in 1987, Streaker is a flip-screen adventure game in the mold of Dizzy and Spellbound. The name is a bit misleading though. While real Streakers tend be jovial pranksters or rubbish gamblers, our poor hero Carlin is only starkers because he has been set-upon by alien muggers on the far-off world of Zuggi. The poor chap has been robbed of pretty much everything aside from his socks. Crumbs.

Where your normal adventure game has the lofty aim of freeing a kingdom or saving a planet, your goal in Streaker is a much more modest one: Recover your clothes so you can get home. No really – That is all there is to it.

Push off You disgusting Pervert!

Not that will be as easy as it sounds, of course. Not only have your clothes (quite literally) been scattered all over the shop, but the streets of Zuggi are populated entirely by dastardly clothes thieves. If that wasn’t bad enough, the moral compass of the local proprietors seems to be desperately off kilter: Our hero might be battered, vulnerable and desperately in need of aid; but the local shop owners are all much more interested in maintaining their various dress codes than they are helping the poor chap out. Turning up in the wrong attire doesn’t just have Carlin turned away, he’s turned away with a charmingly unsympathetic ‘Push Off Fatso.’ Nice.

The slightly strange menu. You’ll see this a lot.

So, potentially risque clothes business aside, does Streaker add up to a remarkable adventure title in its own right? Surprisingly yes. One of the most interesting ideas Streaker throws into a generic flip-screen mix is the concept of time. Starting on a Wednesday, the clock moves forward relentlessly, having a dramatic effect on both the game world and the characters as it goes.

The environmental effects of this ever-ticking clock are fairly obvious: if the item you need is currently held in a night club, there isn’t much point in turning up at three in the afternoon. Likewise, if you need to get into the butcher’s shop, you’re going to be out of luck if you roll up outside at midnight.

More impressive, however, is the effect time has on the characters. For a video game hero, Carlin is remarkably frail. His energy levels are constantly being sapped, he is slowly starving to death and, being a fleshy human meatsack, he also needs to sleep every now and then too. Let Carlin get too tired, knackered or hungry and you lose a life.

When coupled with the environmental factors, this helps to keep things tricky. While Streaker may not be entirely original in having a mechanic you can use to move time forward in a hurry (in this case, a stop watch. A stop watch which also takes up a precious inventory slot,) Unlike many other games this comes at a real cost: Speeding up time also speeds up the rate at which his hunger, tiredness and exhaustion increase, so its not an option you can deploy willy-nilly.

I don’t know what that means.

Just to add to the complexity, Streaker’s thieves are just as mobile as the game’s sense of time. While the enemies in most adventure games tread an endlessly repetitive cycle, the thieves in Streaker are seldom found on the same screen twice. Equally unusually, contact with the thieves doesn’t result in instantaneous death. Instead, they prefer to steal an item of Carlin’s clothing, and only resort to stealing a life if the poor chap is already in his birthday suit.

Stitch all of these different facets together and you end up with a package that both works surprisingly well and deftly avoids a number of potentially game breaking bugs. The constant movement of the villains, in particular, means that even if you are unceremoniously chucked out the hotel after a thief removes your trousers, you can swiftly recover those trousers from the same thief on a different screen, without needing to access the hotel to do it.

And recover them you can. The streets of Zuggi are scattered with various weird and wonderful objects, and each thief has an individual preference for the kind of things they are willing to swap for your stolen kit. Best of all, these preferences weren’t stored on a separate piece of paper (as was the case with ‘Give My regards To Broadstreet‘) but can be accessed directly from a menu within the game itself, a system which works incredibly well. Find a few items a thief likes, and he wi“`ll no longer attack Carlin at all, which is a nice touch. 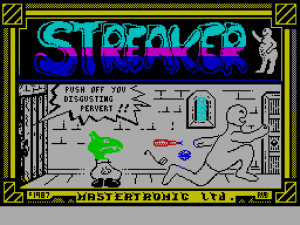 Overall then, Streaker is a really interesting game, for a number of reasons. On an entirely aesthetic note, I love the bizarre mish-mash of modern, medieval and futuristic design elements that make up the of the different areas of Zuggi. On a technical level, I’m also guessing the practical aspects of dressing/undressing the Carlin sprite were probably much more difficult than they appear on the surface.

On a gameplay level it holds up surprisingly well to. There are a couple of confusing elements (you restore your energy, for example, by trying to teleport into a room you are currently unable to access.) but on the whole its still remarkably playable for a person used to the conventions of modern gaming.

But, in an industry so commonly dominated by po-faced bro-shooters, it’s on the conceptual level where Streaker shines best. An older title it may be, but it is refreshing to play a game that taps the direct opposite of the usual power fantasies. Rather than an all power-full musclebound demi-god, the player is forced into the role of a tubby and rather useless council official. Though the game is littered with items that could be used for defence, Carlin is completely unable to take the fight to the thieves: Trade and cunning are your only means of survival, which definitely makes for a nice change.

In conclusion, Streaker is almost the most fun you can have with your clothes partially on. It’s definitely worth giving a go if you have a moment

Bored enough to be reading about Spectum Games? Why not give my album Speccy James a go on Spotify?

Speaking of Speccy Jams, this year’s Speccy Jam is coming to an end! Why not check it out here?