What’s this? Someone made a Godzilla game for the Speccy? Why haven’t i heard of this before? Is this the title to put an end to the Big Gs run of  largely terrible games? Let’s fire it up! 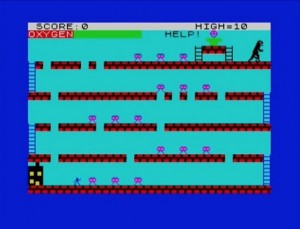 So, aside from clearly being a Donkey Kong clone, what on earth is going on here then?

According to the cassette inlay, Martians have apparently invaded and are currently in the process of destroying ‘the molecular structure of the Earth’s Atmosphere to make it compatible with their own planet.’ Godzilla (or should i say, a friendly dinosaur) has taken it upon his good self to protect ‘the girl of your dreams’, leaving you free to climb ladders and jump over martians until you can reach the top of the level and rescue her.

Of course, considering that the entire planet is soon to be uninhabitable, I’m not really sure how well thought-through any rescue attempt has been. I’m going to go out on a limb and suggest that this probably isn’t an official Toho licensed product.

So then, it may look terrible, be a clear Donkey Kong knock off and have a terrible plot, but the game can still play well, right ? After all, its basically Donkey Kong. How can you break Donkey Kong?

There are entire boss fights which are easier than this

So, it turns out you can break Donkey Kong. It seems simplest and most efficient way to do this it to completely mishandle the main character sprite. For a start, your character  suffers terribly from sprite flicker, popping in and out of existence every other frame. This, alone, is pretty bad, but its compounded by another issue.

You see, every now and then, you get a dead frame of animation where the game quietly ignores any key presses you have made. Best of all, these two problems aren’t actually synced together, so you cant really use the sprite flicker to time to tell when your input is about to die.

That isn’t to say the rest of the game is a master piece, of course. The alien design in particular is pretty bland, and the decision to place them in triplets feels cheap and frustrating. The sound is pretty pathetic even for an early Spectrum game, and the control keys are laid out in a nonsensical line rather than in an intuitive cluster. In keeping with the rock-hard nature of early Spectrum gaming, you only get one life to complete the entire thing too, which really doesn’t help matters.

Overall then, Godzilla and The Martians is a spectacular failure. Both as a Godzilla game and a video game in general. As a Godzilla game, this has literally got nothing to do with Godzilla. Not only does the game avoid buying in to any existing elements of the Godzilla license, but the big (or should I say, pathetically small) G does literally nothing. He just sits there at the top of the screen, presumably massively embarrassed that he has got himself involved in this mess.

As a game in general, Godzilla and the Martians fails because it is literally unplayable. In general, I think people can be too quick to use ‘unplayable’ to describe a game which is mildly flawed. By combining the need for tight well timed jumps with controls that randomly break, I think Godzilla and the Martians fits the literal definition perfectly. In the original cassette inlay, the text warns that this game is for ‘super humans only.’ I’m inclined to agree: though i will point out the most super-human quality you need for playing this is patience.