So, making good on my New Years Resolution, yesterday was the first day I tried to MAKE A GAME.

But how, exactly, do you go about making a game if your only major prior experience of game design is Epic’s classic DOS Adventure title ZZT?

Like most idiots with aspirations to be some sort of half-arsed indie developer, my first step was to download the exciting middleware package Unity. The install was relatively quick and painless, and on firing up a new project the variety of menus on offer wasn’t quite as hopelessly terrifying as I was expecting it to be. Hurrah. 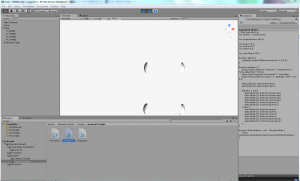 The tricky part, though, was where to begin. To start building something you need a concept, but to come up with a concept you need to have a rough idea of what you’re capable of building. Aieeee.

Consequently, at Unity’s prompting, I decided to go with a 3D world to begin with. I might be laboring under a false pretense, but my reasoning here was a 3d game would be less dependent on my skills as a graphics artist but, well,  We’ll see.

After settling on 3D, I decided the best route to follow would be some sort of simple car-related game. Basically because i presumed a car would be easier to animate that a person, while simultaneously chucking up some interesting physics questions. Again I may be horribly horribly wrong. Again, we’ll see. (If you have a growing sense of foreboding, you aren’t the only one.)

After Googling this helpful (if perhaps a bit outdated?) tutorial, I set to work! I must say, so far Unity has been surprisingly fun to work with. While the system has the sort of treasure trove of both official AND unofficial documentation you’d expect to find when you arrive this late to a technological party, much of it is actually relatively intuitive. I’ve managed to grapple with most of the interface’s basics without referring back to anything at all, which is nice. 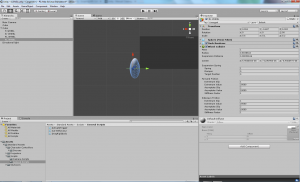 Wheel in Place! Ha. That doesn’t look quite right though?

Thus, within a relative space of time, I had a large rectangular piece of ground, a camera, some nice directional lighting and – most shockingly of all – a reasonably functional-looking cuboid ‘car’ with misshapen spherical wheels. Hurrah.

Of course, as inevitably happens when you don’t follow tutorials to the letter, one of the wheels kept falling off, I realised I had the Wheel Colliders (the unseen element that sits in the background reminding the game to treat wheels as wheels rather than random spheres) rotated to a completely wrong angle, and my car kept dropping partially through the ground. Eek. 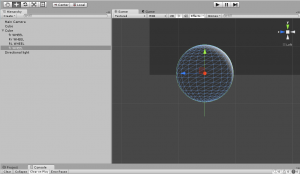 At least I sorted my wheels in the end.

This morning, however, I had a breakthrough. Not only did i manage to sort the wheels out, but on a tilted plane the ‘car’ actually works as you’d expect, which is nice. The only flaw I’m finding at the moment is the script I’m using to get the car working isn’t functioning. I don’t know if the Javascript to get Unity to talk to the wheel colliders has changed, or if I’m just simply being an idiot and have typed something wrong. Either way, I’ll figure it out. I knew this would probably be slow-going, and I’m definitely in it for the long haul.

Once its up and running, lets see if we can create our very own little stunt track…

One Reply to “Fatnick makes a Game: Part 1”