Crumbs! Quite a lot has happened since I popped up here with part 3. SO let’s get stuck in.

Having got something playable up and running, I decided that I needed to sort the car model out once and for all. There’s no point in carefully balancing a mess of interconnected settings if you’re then going to have to rework them from scratch by changing the proportions of the thing is there?

But, with so many awesome cars in the world what do you go for? For me there was only ever one: The Toyota MR2 AW-11 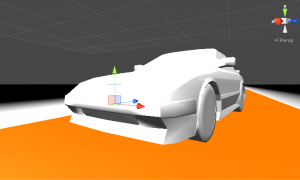 She’s a beauty isn’t she? The major advantage of the AW11 was that I achieved one of my (minor) childhood ambitions by actually owning one for a while, so I know roughly how they handle. If you’ve got some spare cash and fancy a bit of dangerous, vaguely rusty fun I can definitely recommend them. They might not be the quickest car in the world, but they definitely make up for it in other areas. They’re rear-wheel drive too, so you can terrify your friends by pulling briskly out of side roads. HA

so, where did I get the model? Well, if you’re feeling flush there are plenty of models you can buy, but I managed to track down a freebie that was given away free with a magazine about a decade ago. Hurrah!

As is rapidly becoming the norm, however, things did not go exactly to plan. I Replaced the box car with the real model, Positioned everything correctly and, well:

Oops. Turns out that, while you can place the X, Y and (crucially) Z axis anywhere when you’re creating your car in a vacuum, these things matter a lot more when you’re bringing the designs into a program like Unity! I probably should have realised that there was trouble on the horizon when the MR2 was imported in a vertical lift-off-style position. Oh well.

After downloading Blender (which i have no experience in whatsoever) and trying to reorient the model properly that way, I bodged a solution in Unity. The car itself is now a completely empty object, with the mesh ‘body’ applied to a child object within the car. This means the car itself is set to Unity’s X and Y axis, even if the actual body believes it’s back to front. Hurrah! The car still flipped over horrendously easily, but it ran. Though it did have a slight pull to the left.

One Reply to “FatNick Makes A Game: Part 4”