So the other day I took delivery of something quite exiting: An Amstrad GX4000 games console.

If you’re thinking “Amstrad?” and “Games Console?” don’t feel too bad: It lasted on the market for less than a year before being discontinued. It was home to just 27 games and shifted just 15,000 units.  Good heavens. At the time my brother and I were notorious tech gluttons, but I don’t remember ever seeing the console outside of a couple of adverts in C+VG, and we definitely didn’t have any interest in it. Erk. 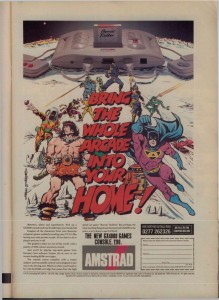 This is the Advert in question, in fact. £20m advertising budget and they couldn’t even get the real batman…

Unboxing the thing today though, it’s actually an impressive little unit. Far smaller than the marketing material made it seem, it looks surprisingly cool. Sporting a vaguely wedge shaped and featuring all kinds of fun little fins and detailing, it actually makes for a better looking Star Wars ship than most of the ones found in episodes 1 – 3. Give or take a couple of engines, of course. 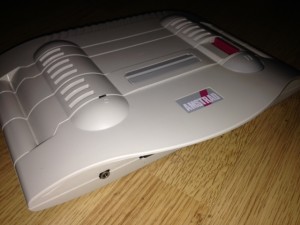 See! It doesn’t look THAT bad, all things considered.

Speaking of Sci-Fi, a quick look round the back reveals a futuristic approach was taken to the console’s outputs. Sure, you might have the usual RF out found on pretty much all retro consoles, but alongside an 8-pin DIN plug for wiring the thing up to a monitor there’s actually a fully-fledged RGB scart socket there to. A scart socket! in 1990! Blimey.

Even better, the front of the machine has both the usual 9-pin Atari-style controller ports, a port for an analogue joystick and a stereo audio-out. This was clearly a machine from the future. In fact, like the SNES, the GX power button even included a locking mechanism to help hold the cart in place – and this was well before the SNES was released. Could the GX be a great, relatively undiscovered console?

Unfortunately, while the exterior is impressive, things take a turn for the worst when you plug in Amstrad’s controller. Shamelessly inspired by the Master System and NES, the controller is a basic rectangle with 2 fire buttons and a d-pad. While the exterior of the console was relatively forward-looking, the inclusion of a pause button on the console rather than the controller exemplifies a design that was clearly stuck in the past. 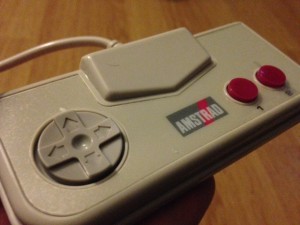 It’s difficult to capture the pain in a photo

And not just stuck in the past, but stuck in the past in the worst possible ways as well. Regardless of whether you lean towards cross or disk-shaped d-pads (Amstrad went with the latter, FYI) it’s clear that Amstrad’s design is among the worst of the lot. While the fire buttons might be reasonably effective, the d-pad is stiff, unresponsive and surprisingly spiky. When coupled with the pad’s remarkably small size, this makes it a relatively painful controller to use for any extended period of time.

So if the exterior had surprisingly high production values and the controller surprisingly low, what about the internals? Well, plugging in the (again surprisingly-small) bundled cartridge for ‘Burnin’ Rubber’ and flicking the power switch reveals 3 things. All of which are unwelcome:

Unsettling Amstrad signs aside, the Burnin’ Rubber turning animation is a little bizarre

So as the specs go it was definitely underwhelming. As far as software goes, however, the actual list looks pretty good – within reason. From Batman the Movie and Barbarian 2 through to the Likes of Operation Thunderbolt and S.C.I, the GX looks like it has a reasonable amount of software. The only problem, however, was that most of those games were nothing more than straight ports of the existing CPC titles – only priced at least double the cost of the tape version.

Worse, the GX itself was actually a cutdown version of Amstrad’s Cpc+ range of computers. This means some of the game design wasn’t even fully optimised for the console. If you change the control scheme in Burnin’ Rubber, for example, you have to manually nominate controls for left and right – something that makes sense on a keyboard but feels a little alien to a console gamer.