Consequently, it isn’t too hard to see why the GX4000 failed as a console at the time. There is an amusing sting in the tail, however. While the machine had a £20m advertising budget and a glitzy launch in Paris, from a gamers perspective much of this was sent in totally the wrong direction. For some reason, the marketing team decided to focus heavily on the arcade side of gaming in the promotional material, even though there were only a handful of arcade ports available for the machine (Klax, SCI & Operation Thunderbolt.) and this automatically led on to unfavorable comparisons with the Megadrive, with its ever-growing library of near arcade perfect ports.

Considering that Amstrad was owned by Alan Sugar and the marketing handled by his future TV sidekick Nick Hewer, the GX4000 effectively saw the Apprentice dream-team making the very mistakes (not understanding the customers, competition or the market in general) that they’ve regularly lambasted their contestants for making over the years. Oops.

As a modern collectors piece, it’s a slightly difficult one to recommend. The system can be picked up boxed for less than £40 if you look hard enough, but each of the 27 games seem to have been produced in such small production runs that they regularly sell for above £50. You know you’re in trouble when eBay auctions for commercially-released titles are considered as news worthy events by the fan sites. 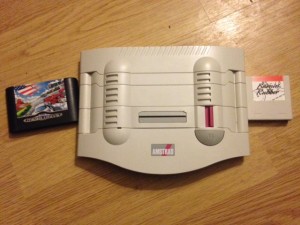 Still, I must say that even with access to just the one cart, I do have a soft spot for the thing. It’s a funky little console which contains my favourite sound-chip and whose software library comprises of an interesting snapshot of the 8-bit Microcomputer market in 1989-1990. There’s also multicart available for the thing, so I look forward to spending a bit more time with it soon.

Do you like the sound of the AY 89-12 soundchip? Why not check out my Speccy Jams album here