I like Science, I like video games. Rarely, however, do I like the two together – and that’s certainly true of today’s “video games are harmful” story: Call of Duty will make you mentally ill.

According to the news story:

Researchers found that people who regularly played action games had reduced activity in the hippocampus, the part of the brain responsible for short and long term memory as well as spatial awareness. Instead, they had learnt to rely on a different part of their brain to navigate through the virtual worlds.

This is potentially bad news for the gamers, as other folks who’ve been found to be reliant on the striatum have been found to have less grey matter in their hippocampus – and this has been linked to Alzheimers and other neurological disorders. Eek.

As is usually the case  with science journalism, you won’t actually find a scientific reference for the paper being discussed, so for those interested, it is:

Unfortunately, the paper itself doesn’t seem, to be online anywhere, but you can read the abstract here

Looking at the abstract, there are some interesting details that are (naturally) left out of the mainstream coverage.

The test used was 4/8VM test. This involves plonking the subjects in a circular maze with 8 Spokes. 4 arms are opened, 4 are blocked off. Then, all 8 arms are opened up and it is up to subject to retrieve items from the 4 arms that were previously blocked. 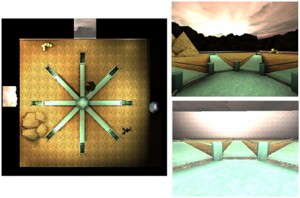 Now, here’s the important part – straight from the abstract:

After participants have learned the task, a probe trial is given in which all landmarks are removed, whereby spatial learners make more errors than response learners, indicating reliance on external landmarks.

This, of course, is a brilliant way of differentiating between those are who navigating specially and those who are navigating with a response strategy. However, this approach has one obvious and major flaw: by removing the landmarks, you are actively discouraging your subjects from navigating spatially!

As the experiment doesn’t seem to have a component where the response navigators were put at an equal disadvantage, are gamers more likely to fall-back on a response strategy by default, or is it possible that they merely have more practice at switching strategies on the fly (I.E. as they would with any boss in any horizontal shooter ever created?)

And then there is, of course, the standard issues with studies like this (tiny sample size, no apparent definition of ‘action video game.) Ho Hum.

“Researchers found that people who regularly played action games had reduced activity in the hippocampus,”

all the study is saying is that video gamers deploy a strategy LINKED with reduced activity in the hippocampus, which is LINKED with neurological disorders. They’ve identified correlation, but have not put forward a causal link. This is most definitely the newspaper’s bad and NOT the researchers.

In conclusion then, you have an interesting (if flawed) study which, while linking up with some other research, does not demonstrate a link between video games and any neurological condition. Well done useless media, well done.