But wait there’s more! At the end of 1998 Codemasters, having brought the Brian Lara development team over from Audiogenic, released what would be their last Brian Lara Cricket, flinging it out on the PC and Playstation.

Coming from ’96, it’s disappointing that some of the features didn’t make it across the generation gap. The county teams are, sadly, out and bowling has been slightly simplified.

All of that is forgivable the second you see the game in action though.

At this size, it looks almost like it could be a tv clip.

You see, the Codemasters chaps grabbed all of the Playstation’s 32 bits, and grabbed them with gusto. Sure, the textures may have that slightly soft, square ‘Playstationy’ look to them, but there is a breathtaking amount of motion capture on offer here, and its good quality work too: The fielders dive around with an elasticity not found in even the 360 iterations of the series and The batsmen also play realistic-looking shots as they boff the ball around the field. In fact, if you look at the gif above, even the umpire shuffles around as he waits for the bowler to make his delivery. It’s impressive stuff.

Yes, I know graphics don’t make a game, but when it comes to sports sims its these little touches that make a big difference. Especially when they actually hint at the deeper mechanics underpinning the game.

After all, a quick game reveals that the team didn’t just stop at capturing the on-field mannerisms of the actors, they’ve clearly worked hard on making sure they’ve captured the whole kinetic spectrum: The ball flies through the air  at about the right speed you’d expect, it travels into the field/stands at a rate that feels consistent with your success at playing the delivery, and the fielder is able to cover a reasonable feeling amount of ground before returning the ball at a rate that allows the batmen to take a predictable number of runs.

It’s sounds like pretty basic stuff, but this is where simulations are made or broken. If edges bobble unconvincingly high, or robotic fielders stubbornly refuse to take a couple of side steps to field the ball or everyone ends up scoring at an unrealistic 18 runs an over, the entire artifice comes crashing down – regardless of how playable it it as a game. The constant barrage or nice touches, however, mean that ’99 gets away with its sim credentials intact.

Even the run out cam is pretty snazzy

That isn’t to say there weren’t out-and-out improvements to actual the game mechanics. As a fully 3D game, Brian Lara features a fully 3D camera: Rather than play from the normal broadcast angle (which, while adding to the realism, really isn’t the best way of judging where the ball is going) you also have access angle behind the batsmen (or even from the view inside his helmet, if you’re feeling brave!) which makes timing the ball slightly easier.

And you’ll need all the help you can get, too. Where the ball may have been a little floaty in Audiogenic’s earlier titles, in ’99 the flight of the ball is quicker and much more direct. Though you now have a dedicated defensive shot button, it doesn’t make life tremendously easier for you. Batting in ’99 is essentially a sharper more demanding version of ’96. As well it should be.

If batting is trickier  bowling is no easier either. Though in one sense bowling has been simplified (in-swingers and out-swingers are now mapped to different face buttons, with the bowler’s own characteristics providing the amount of swing,) the AI is less forgiving. Put the ball somewhere where it can be hit and it WILL be hit.

In fact, speaking of the AI, this has been improved too. Where the AI in ’96 was unable to adapt to different playing conditions, One Day batsmen in ’99 are much more aggressive risk-takers than their test counterparts, and bowlers actually bowl to set plans (even if the plans themselves aren’t always that great.) This is a major, major improvement.

The game does, however, have one flying-controller-worthy fault in its control mapping. Despite having four face buttons, Codemasters decided to map the run button to the same button as the standard grounded strokes. This means that there’s a good chance that an absent minded tap will leave your batsmen suicidally charging down the wicket with the highly insensitive ‘cancel run’ button giving you no chance to save him. This is a very silly blemish on a otherwise a very solid cricket game. Arggh.

Aside from that though, ’99 is essentially a perfected version of ’96. It even included members of the bbc commentary team (though one of those is Geoffery Boycott.)

So there you have it, three increasingly competent cricket games released on three very different systems. Audiogenic definitely deserve acknowledgment for their contributions to cricket games.

Though the Brian Lara Cricket name was to live on, ’99 was the last game to be made by the Audiogenic team, and the series suffered for it. Later developers Swordfish and Trickster brought their own elements to the series, but from the weird umpire signals, ‘confidence’ meters and cold dead eyes of the players everything was just a little bit broken. I’d have loved to have seen what Audiogenic could have come up with had they been allowed to continue. 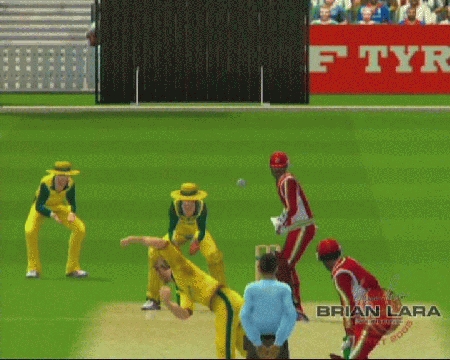 Thanks for giving us all the runs, folks.