Its always best to start how you mean to go on isn’t it? How fitting, then, that the first GX4000 game we examine is one of the old CPC ports that dominated the GX4000’s library.

Originally Released in 1988, Barbarian II was the sequel to one of video game history’s earliest courtiers of controversy. Though Barbarian was a robust and well received one-on-one fighter, its’ main claim to fame stemmed from its deployment of that unique mix of sex and violence that has proved so useful in drawing plenty of free publicity.

Advertised by artwork that included a scantily-clad glamour model (plus, much more amusingly, Wolf from the original Gladiators TV series) and featuring gameplay which included depictions of brutal decapitations, you could be forgiven for presuming that any sequel would be a cheap cash-in, produced to grab as much money as possible while the property still retained a bit of heat. 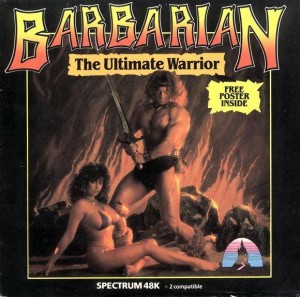 Who would have thought Gladiators could be a step up from something?

In fact, Barbarian II is a remarkably ambitious game. Where the original was a fighter, the sequel is a huge adventure game spread across hundreds of interconnecting maze-like screens.

Hot on the tail of the original Barbarian’s villain, the wizard Dax; the player (who can choose to play as either the original’s rugged hero or as its fair damsel) has to navigate this labyrinth while leaping over environmental hazards and solving rudimentary lock/key puzzles in order to track down the scoundrel and do him in for good.

Not that he’s going down without a fight, mind you. Dax has all kinds of weird and wonderful henchlings at his command (from funny little flying thingeys up to huge Venus Flytrap-like dinosaur wotsits,) and being a wizard, he’s also capable of  teleporting them directly to your location for a bit of pugilism. Ooh eck.

Thankfully then, the original Barbarian’s fight mechanics made the transition intact, so when the bad guys materialise you have access to a full array of over-head chops, powerful slices and even the odd sneaky kick with which to defend yourself. Hurrah!

Not All of the Badguys are tremendously scary.

So then, is Barbarian II any good? Personally I think yes. Not only does the complete package hold up quite well, but most of the individual game mechanics play pretty well in retrospect too.

This particularly applies to the combat: While those expecting Golden Axe or Street Fighter II might be a tad disappointed, there is something enjoyable about the slow, rhythmic nature of the fighting.

Yes, the controls might seem a little weird to a modern gamer raised on more active fighters – the player has to hold the attack button down to enter attack mode and THEN use the D pad to initiate high, medium and low attacks – but they work well enough in the circumstances. In fact, I really like the way that the need to set yourself in a position before you strike forces the player into a more defensive style of combat.

On top of this, the difficulty level is incredibly well balanced too. From re-spawning baddies to instant-death jump puzzles, the developers were juggling a surprising large amount of highly-dangerous gameplay mechanics. Mishandling just one these would probably have been enough to drain all remaining fun out of the game.

Their juggling was largely successful, however. Though instant-death jump puzzles are frustrating, the player is given a healthy amount of lives, which they can also replenish. Though Dax’s minions constantly respawn, the game ensures you never have to fight more than one at a time, so the fights always seem fair.

In fact, unusually for an 80’s adventure, you’re even given a navigation aid at the bottom of the screen (in the form of a gigantic sword) – so there isn’t even the need for the player to bust out a small forest’s worth of graph paper. Like a fine meal, the whole experience feels incredibly well balanced.

Unfortunately – as may become a common theme in this feature – though Barbarian II is a inherently a good game, there are  some issues with the GX4000 version.

Perhaps the biggest and most obvious issue stems from the fact that it is quite obviously the same game as the original CPC version. Sadly, The Amstrad CPC Barbarian II was slower and less fluid than the versions found on the Speccy and C64. Seeing these performance issues replicated on the GX4000 suggests that the machine was not fully being taken advantage of, and that the port was a quick and dirty one.

On top of that, the controls don’t work fantastically well on the GX Controller either. Sadly, both of the buttons can be a bit stiff and unresponsive, and this can lead to the player either stubbornly refusing to jump when running towards a bottomless pit, or randomly turning their back on an opponent they were supposed to strike. Not only that, but the control to make the player enter a doorway (which is always in the background towards the top of the screen) is mapped to the left-down diagonal, which just feels odd.  In fact, the whole thing feels odd – it’s as if the original’s keyboard/joystick controls were simply remapped without anyone considering what the effect would be on the person playing the game.

Often, your main enemy is your own stupidity

Overall then, Barbarian II is an interesting novelty. As a title which feels like it’s been fully constructed around the strengths and limitations of 80s microcomputers, it’s definitely fascinating to see it translated into a console setting. If you’ve already played Barbarian II (or its prequel) but have only done so with a keyboard/joystick, it’s definitely worth giving it a go. Even though it isn’t fully translated (GX software was also compatible with the CPC+ range of computers, so a lot of options on the title screen are still mapped to keyboard controls,) it still feels like a remarkably different offering – which is a bit strange, considering it’s EXACTLY the same game.

Looking at it in the context of the original 1990 release, however, it’s easy to see how it might have been a little bit underwhelming: Though priced comparatively to Master System software, the retail price was potentially up to ten times that of the 2 year old CPC game it was identical too. Crumbs. Though still an enjoyable game at heart, you can see why the likes of Barbarian II wouldn’t be enough to persuade those still faithfully clinging to the 8-bit era that the Amstrad machine was the shape of the future.

One Reply to “Barbarian II”