I’ve been thinking of writing something on the whole music streaming world for a while now. Thankfully, Jasper Hamill over at The Mirror has given me an excuse with his vaguely partisan article on Apple Music.

As both an artist and a keen listener, I’ll admit my relationship with both Apple Music and Spotify is perhaps something other than ordinary – so my experiences may not ring true for everyone. With that said, here we go:

First things first: i would just like to point out that I was originally genuinely excited about Apple music. Though (as you may have noticed) I’m not exactly in this whole music malarkey to gain fame and boundless riches, I was still pretty chuffed to be granted an opportunity to seize a bigger clump of the financial pie than was currently being offered by Spotify. Woo.

On top of that, I thought the whole Connect idea was a genuinely ingenious one too: No one likes to see an endless barrage of irritating (but necessary) “listen to my rubbish music” tweets, so having a dedicated music service where that sort of thing was both welcome AND encouraged seemed like a obvious win for everyone involved.

When I logged in for the first time, however, my hopes were completely crushed. The primary problem for me was (and is) quite a simple one: a direct search for Fatnick in Apple Music revealed no hits for my music whatsoever.

As an artist, this basically makes the whole service completely useless. If people who are directly looking for my music are unable to find it, what chance do those who aren’t directly looking for it have? When I’m getting a reasonable number of plays over at Spotify, why should I divert my efforts into helping Apple when there’s no guarantee I’ll have anything to show for it in the future? 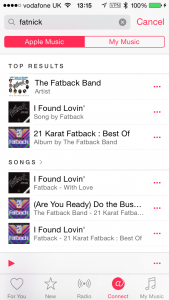 Are you sure you’re not forgetting someone, apple?

I don’t want this to come across as sour grapes – I don’t have delusions of grandeur and I don’t expect to be included in Apple’s fancy curated playlists or anything like that. I’m perfectly happy just being another value in the database… All I’m saying is that when someone goes looking for that value, it would be quite nice if Apple returned it to them. That doesn’t seem like too much too ask.

I’d also like to point out at that I’m not paranoid. I don’t believe that Apple are out to get me. I do believe, however, that there is a massive tension at the heart of Apple Music. Is it a bespoke recommendation for those with exquisite taste or a vast repository for every music recording every released by anyone? It feels a bit like Apple Music is trying to be both, but successfully managing to achieve neither.

Indeed, a similar confusion seems to hover over the connect social media service. Technical issues aside (and it’s REALLY annoying only being able to post from your phone when all of your works in progress are on your desktop,) its scope is frustratingly limited. Not only is it hidden away in a tab (if Apple Music is a walled garden, connect is a small pond fenced off in the corner,) but the only entries you see are from artists you’re already following. From an artist’s perspective this is incredibly frustrating: It’s one thing to be relatively invisible in the main library, but being equally invisible on the social side is quite another. An integrated, well supported and searchable social network side was one area which could have made a massive, massive difference. As it stands, its a bit of a confused mess.

On a purely technical level there are further drawbacks too. You see all of the lovely Spotify links over there in the sidebar (including the crucial follow button?) None of that is available on Apple Music at all, making it incredibly difficult to work into a general web presence. Now I’m not saying that Spotify isn’t without its fair share of little annoyances, but at the end of the day they’re currently serving a small army of Fatnick fans with dozens of track plays a day – which is all I could ask for, really. Apple Music might well be equal to Spotify in terms of being a physical repository to store music, but in publicity terms it’s way, way behind.

(FatNicK fans, I don’t really acknowledge you enough, do i? You are all incredibly awesome. Thank you.)

One Reply to “Spotify, Apple Music & Why I’m rubbish at the music biz”