I’m pleased that Jasper over at the Mirror seems to be having fun with Apple music, as for everyone else it seems to be a colossal shitstorm.

Thankfully, I haven’t had to put up with it trashing my entire music library myself, but I am left slightly perplexed at the conclusion that Apple Music has a better recommendation engine than Spotify. Though I accept the point about the superiority of Apple Music’s writing, I think that Apple’s ‘victory’ in that department hints at a much larger flaw in their entire recommendation system.

After all, there is no reason why Apple Music should not be able to entirely stomp Spotify in this department: Not only do they have a vaster reservoir of music, but they already have access to both my entire digital library and my listening habits. This should be a slaughter…Except its not. Yes, Spotify’s writing may not be penned by professionals, and they may only have access to a relatively small snapshot of my recent musical history, but they’ve still managed to throw up a ton of useful obscure stuff I may not have encountered otherwise (from the chippy brilliance of Chipzel’s Never Tell Me The Odds to the sublime keyboard work on Larry Carlton’s Blues Bird.) 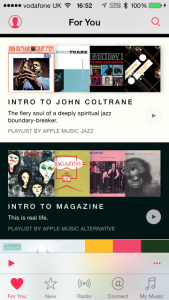 Magazine! A band so good I ‘ve listened to them thousands of times before downloading Apple Music…

Apple Music’s recommendations, on the other hand, seem to be spectacularly useless. When Mecha-Zane Lowe isn’t presenting me with music I already own (I’m not sure I need an Intro to Magazine when I already have a copy of everything they’ve ever released sitting in my iTunes library,) it’s just being plain useless. INXS. Really?

To me, it feels that the difference between the two services is that Spotify’s recommendation engine is using their entire library to find me me stuff, where Apple seems to be filtering my taste through the music they’ve produced copy for. That, for me, could well be the reason why Spotify me suggests I try Fatburger (who I’d never heard) and Apple suggests John Coltrane (who, inevitably, I and everyone else in the universe, has.)

Just as big a problem for Apple Music, mind you, is the interface. I’m not really sure how anyone could prefer Apple Music to Spotify. Yes, on an aesthetic level the artwork is probably rendered in a slightly prettier fashion on the Apple service, but a user interface has to do more than look pretty – and while Spotify feels like a helpful chaperone who leads me gracefully towards what I want (and didn’t know I wanted) to hear, the Apple Music interface feels more like a barrier between me and the music. 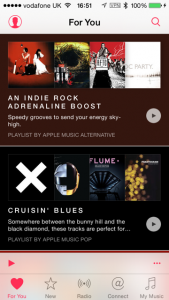 Indeed, from the unhelpful sand-boxing of elements like connect to the infuriating rendering of the magnifying glass in areas not covered by the search, I’m beginning to wonder whether Apple have managed to lose all of the staff who had any concept of user experience. Although Spotify and Apple Music are largely made up the same ingredients, the whole Apple Music package just feels slightly less than intuitive.

Well, I say the same ingredients, but Apple Music has one slightly oddball extra: Beats One Radio. Though it represents a big coup in terms of celebrity endorsement, I’m slightly confused as to why it’s been rolled into Apple Music. After all, if you have a massive library that goes into the millions and are able to offer me hundreds of tracks tailored to my own specific tastes, why on earth would I want to listen to Zane Lowe name-drop for ten minutes before playing a track which isn’t tailored to me? It’s inclusion feels about as current as Apple bundling an 8-track cassette player for your car.

Overall, I find that Apple Music seems to be confused on almost every single level, from concept through to interface. I don’t trust its recommendations as a listener, and I don’t really feel supported as an artist. Though a good analogue of Spotify on a purely mechanical level, it feels like Apple’s engineers don’t really understand what people want from a streaming service…which might be why so many people intend  to turn away once the free trial is up.

One Reply to “Spotify, Apple Music & Why I’m rubbish at the music biz”