Well, that was a nice break. I’ve been away on holiday in Florida for the last couple of weeks, which is why things have been a bit quiet around here. Things will get back up to speed shortly.

In the meantime, if you haven’t seen it, the Guardian has published a list of the 30 worst video games of all time. You can read it here. The list is a bit of a weird one as, aside from a predictably modern bias, it appears the authors couldn’t decide whether they were aiming for a list of well-marketed games that fell short of expectations or games that were simply terribly terribly broken.

Sadly, there’s no Godzilla vs The Martians. 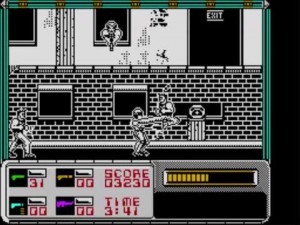 One thing that really struck me, however, was a single throw away line about Ocean:

Ocean’s Terrible movie tie-ins? Aside from the obvious major success stories (such as Batman the Movie and the chart-dominating Robocop) there were a number of less famous titles that reviewed very well (such as their rather spiffing take on The Untouchables, and the slightly more obscure games based on Total Recall and Hudson Hawke.) In fact, even the Ocean titles that weren’t quite A-Grade were generally interesting games nonetheless. Just look at the isometric version they created from Short Circuit or the upper-torso simulator that was Read Heat. 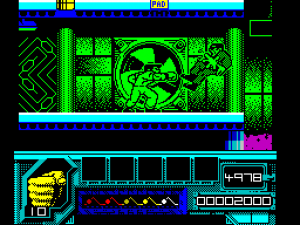 That’s not to say that there weren’t a number of poor Ocean games of course (Highlander doesn’t seem to be terribly popular,) and it’s always worth remembering that, even more so than today, mileage per each software port could vary wildly; but i still don’t know where this revised reputation is coming from. From the Spectrum’s perspective at least, Oceans arcade ports and licensed titles are among the system’s best overall games. 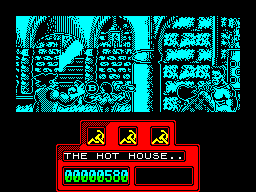 As someone too young to see the film, I always why you spent half the time punching nurses…

This isn’t the first time I’ve seen this sort of thing either. Just check out this article about the well-recieved 8-bit Batman games. It seems a bit odd that, in a world where 8-bit fetishism is everywhere, the historical legacy of the original 8-bit games is being removed and rewritten.