After a week of cryptic shenanigans, The Oliver Twins have announced the discovery of a new Dizzy game! Hurrah!

(As a side note, it’s Dizzy. Not Dizzy the Egg. Saying Dizzy the Egg is like saying Thomas a Becket. Just stop it.) 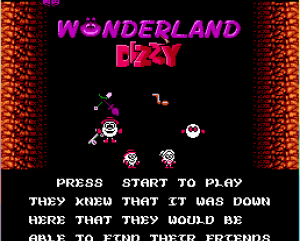 Developed for the NES in the early nineties, Wonderland Dizzy is a modified version of the rather lovely Magic Land Dizzy. Sadly, however, it was one of the titles involved in a spat between the twins and publisher Codemasters, so it looks like the code ended up being consigned to a box. The twins have posted a vid about about how the discovery was made 22 years later here:

So how does it hold up today? Quite well actually! Of course, if you’ve played through Magic Land everything will be quite familiar, but the game has a couple of tricks up its sleeve. Aside from a number of the puzzles having been modified to accommodate the classic Alice in Wonderland characters, the game allows you (on alternate lives) to play as both Dizzy and girlfriend Daisy. 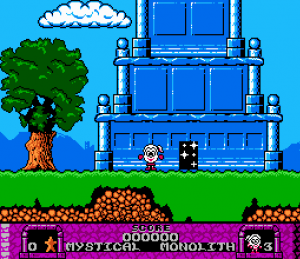 Daisy aside, this is all too familiar

it’s an interesting mechanic: though it effectively doubles the player’s lives, each of the characters continues from where they reached their grizzly end. This means dying on one side of the map as Dizzy can force you to continue from the other side as Daisy. Helpfully, however, the Cheshire Cat delivers one character’s items to the other, so you’ll never end up in the situation where you need an item held by the second player. 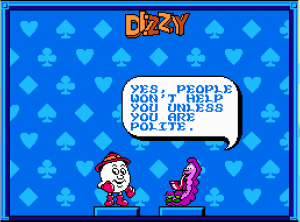 On top of that, the visuals are jolly nice and the music, though repetitive, is lovely too. The control style is classic Dizzy fare to: Though responsive, he’ll end up rolling around a lot. This makes him a bit of an acquired taste for someone raised on your Sonics and Marios.

Still, it’s good fun, and the universe is definitely better off with it having been found and made widely avaialble – and it is widely available. As the base product is a NES rom file, the Oliver Twins have kindly made it free to play in your browser. You can give it a go:  here 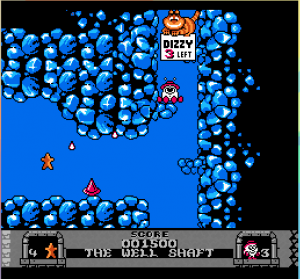