We live in strange times. On the one hand we have a bizarre cultural fetish for 8-bit video game aesthetics, while on the other we often deride the actual 8-bit titles themselves (unless they are one of the safe, untouchable few.) A good example of this are the brilliant Ocean Batman games, which are generally given a bit of a pasting in retro roundups.

All the more fitting, then, that the next GX4000 title we’re going to examine seems to be the most overlooked of the bunch: Batman (or, rather, Batman: The Movie as it was known on every other format at the time.)

Originally released in the shadow of Tim Burton’s film and coded by the pair behind the fantastically successful (and fantastically fantastic) Robocop, Batman the movie is testament to a software house at their apogee.

Pah! None of that jumping malarkey for Batman

As was reasonably normal at the time, the game is a genre-bending affair that splits the film’s action sequences across 3 different gameplay styles. The player controls the vigilante himself through two Bionic Commnado-inspired platforming sections, takes command of some of his vehicular toys in two side-scrolling stages and even controls the Bat Computer for one intriguing puzzle-based level.

Loading the title up today, Batman still comes across as a highly polished experience. Even without considering the limitations of the hardware, the artwork is still clearly chunky and detailed. The soundtrack is both surprisingly full and remarkably evocative (It was incredibly unusual for every stage in a game to have its own musical cue – as was the case here.)

In fact, From the awesome titlescreen through to (what is probably) the best energy bar in any game ever (it sees a picture of Bats slowly wipe away to reveal THE JOKER,) the game is full of lovely little touches.

All that’s for naught, of course, if the game plays terribly… but Batman is wonderful. The fact that Batman seems to have forgotten how to jump makes comparisons to Bionic Commando inevitable, but Batman out Bionic-Commandos Capcom’s arcade game.

Though slower, Batman feels more weighty and intimidating. He may eschew a gun in favour of an industrial supply of Battarangs, but his weapon (ooh err missus) feels meatier and more satisfying. On top of that, Bats’ grappling hook feels believably weighted and allows you to swing in an intuitive and controllable manner. This alone makes the simple act of navigating Batman a joyful and rewarding experience.

And there will definitely be some navigation: both of the games’ platforming stages are labyrinthine. Scrolling in all four directions, they offer both a variety of alternate routes to explore and a formidable collection of environmental and goon-shaped hazards to conquer (From the amount of gas-spewing pipes on display, it’s clear that Gotham’s residents don’t put much stock in health and safety.) You’d be hard-pressed to find a more complex example of 8-bit level design.

Thankfully, Battarangs seem to come in a jumbo pack…

Batman’s vehicular levels work just as well. Set against the backdrop of Gotham’s streets, they aren’t the obvious no-brainer shooters they could have been. Indeed, both stages offer Batman no offensive capabilities whatsoever.

The first level is a car chase which sees Batman trying to outrun the Joker and his henchmen while weaving through heavy traffic and skidding round corners to avoid police roadblocks. As the Batmobile has no  weapons (Batman’s grappling hook can only be used to turn corners more quickly,) this rapidly turns into a clever game of risk management: Do you skid to a stop to take the corner more easily (and risk being t-boned) or try to grapple onto a nearby lamppost and risk overshooting?

The flying stage is really a heavily-disguised slalom sim – albeit one based even more heavily on timing and momentum thanks to the “flags” raising up and down and the “obstacles” homing in on the player. Though it might seem impossible first time round, it’s actually really well balanced in terms of difficulty and a very clever interpretation of the scene from the film.

In fact, even the throw-away puzzle section (which has you mixing and matching ingredients to uncover the formula for Joker’s Smilex) doesn’t let the side down in anyway: Batman the Movie is definitely a genuine classic.

But what of the GX4000 version then, eh? Well, unfortunately Batman is another title that was ported straight across from the CPC computer. In fact, it’s slightly worse than Barbarian: despite the enhancements that had been made to the GX4000’s innards, there are actually incidents of slowdown present that don’t seem to have appeared in the original game. Oops.

It’s a shame too, as there was definitely room for a couple of small improvements. Though the original control scheme (which works 99% of the time) is fine, it was built around the assumed presence of single fire button. This means that in the platforming sections, it’s potentially possible to grapple upwards when you actually intend to fire off a battarangs. On these occasions, the second button on the GX controller definitely feels like a bit of an elephant in the room. 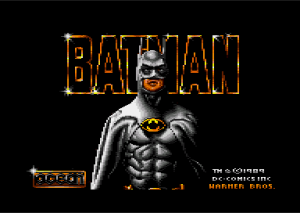 The title screen is pretty good.

There is however, one good potential reason to plump for the GX4000 version: difficulty. Batman might have been a short game, but what it lacks in length it makes up in, well, dead Batmen.

While no version of the game has overt difficulty levels, the GX4000 version has a couple of timing quirks which make it a little easier to play: grenades (thrown so ruthlessly towards Batman the Spectrum) bobble up and down like flighted cricket balls, and the batrope in the driving section obligingly hangs around for the couple of extra miliseconds needed to successfully grab a lamp post. These are incredibly marginal things to be sure – but it’s surprising just how large an effect a couple of tiny changes can have on the overall game.

Mind you, if you don’t mind a challenge, it’s worth remembering that Batman is still exactly the same game as the CPC version. With the difference in price between the cart and tape versions sitting at anywhere between 3 – 10 to 1 (both in 1990 and now,) it’s difficult to recommend on that basis alone.

Still regardless of the version you plump for, Batman (The Movie) is a classic game and an example of a fantastic licensed game. It’s well worth considering adding it to your collection.