Blimey! it’s been two years since I, err, celebrated the Megadrive’s quarter century by destroying a cartridge. Weirdly, however, the Megadrive’s 25 again today. How can that be?

Well, two flippin years was the amount of time it took for the Megadrive to leave Japan and arrive in the UK. Can you imagine that today? People get whingy if they have to wait a week. The past certainly is another country. 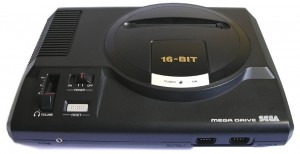 The Japanese one looks amazing, but this will always be what a Megadrive looks like to me.

Personally, I wasn’t lucky enough to have a Megadrive this side of 1990  (Not necessarily a bad thing considering the relatively meager launch line up,) so it’s a few months to go before i can say it’s been 25 years since I slotted a cart into a Megadrive for the first time (either Sonic 1 or James Pond 2, if you must know.)

Still it’s nice to see the usual articles and Megadrive game lists doing the rounds today. If you fancy celebrating with something a little less obvious than Gunstar Heroes or Sonic, i have a few suggestions for you here.

Alternatively, if you fancy rocking out to a megadrive-themed soundtrack, then my Attack of the Terrible Lizard Kitty album is available on Spotify and Bandcamp