24 years ago, my brother and I stumbled towards the end of classic intergalactic Megadrive adventure Toejam & Earl. Though we’d previously borrowed it from a friend, this was the first time we were playing through on our own chunky cartridge – and we were about 66% of the way towards completion! Hurrah!

Then, for some reason mind-numbingly stupid reason, we decided that we didn’t want to complete it on the day we had bought it, and we turned the the power off. We never made it that far again. 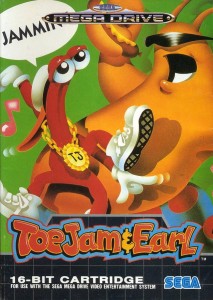 Thankfully, however, I managed to finally complete it for myself last weekend (if you haven’t you should – the ending is one of the best on Sega’s 16-bit monster.) and it got me thinking: why isn’t Toejam & Earl’s awesome funk-inspired soundtrack inevitably found at the top of the ‘all-time best videogame soundtrack’ lists?

Yes, it inevitably stumbles onto Megadrive/Genesis-only charts, but i think it deserves a seat at the top table for a number of reasons:

OK, this is the most subjective reason I’ve got, but musically this is a really, really good soundtrack! If you’re simply looking for a tune you can whistle, the Toejam and Earl soundtrack is packed full of beautifully melodic Herbie Hancock-inspired hooks. If you’re looking for something a little deeper, there are some really interesting musical ideas and structures (like the multi-layered lead/bass parts on theme tune Toejam Jammin’) waiting to be discovered here too. As a piece of art, it works on so many different levels.

Not convinced? I know some people struggle to separate the music from the technology used to generate it, so here’s the One Ups’ cover version of the theme tune. I’d say this could easily find a home on any decent funk album:

Whenever anyone discusses 16-bit videogame soundtracks, the focus tends to be on Yuzo Koshiro’s epic compositions for the Streets of Rage series. This is fair enough as well. After, all the Streets of Rage soundtracks are (and always will be) a tremendous achievement. One thing that went in Koshiro’s favour, however, was the fact that a lot of the sounds he was looking to emulate were synthetic to begin with. In Toejam & Earl, a much greater number of the sounds used are based on physical instruments.

Like Koshiro, Toejam and Earl composer John Baker did have a couple of things go in his favour, mind you. One of the major strengths of Frequency Modulation synthesis (the model used by the Megadrive’s YM2612) was the recreation of any sort of twangy metallic-style sound – so it’s definitely worth noting that that architecture of the chip lent itself to generating the jumpy bass and sparkly clavinet patches that act as the backbone to many of the Toejam & Earl compositions.

Still, advantages aside, Toejam and Earl’s exquisite bass sounds are generally much more authentic-sounding than any other slap bass patches found in the Megadrive library. Plus, many of the other sounds created by Baker (such as his impressive library of sqeulchy, analogue synth-style sounds) are both highly admirable and relatively unnatural sounds for the YM chip to be making.

Consequently, if you ignore the outstanding quality of the musical compositions, based on timbre (sound quality) alone, Toejam & Earl remains an outstanding achievement. While to the uninitiated the Megadrive’s sound chip might be best known for generating ‘robot farts,‘ I’d say Baker’s funk-based masterpieces can easily rival Koshiro’s work in fully highlighting the breadth and depth of YM-2612’s capabilities. 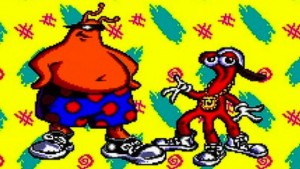 Who want’s a simple Sound Test when you can have a psychedelic JAM OUT?

If you’re raising your eyebrow that’s probably fair enough, but I think Toejam & Earl represents an important landmark in the evolution of sound design in games. Yes, from the mid-80’s, FM-powered arcade machines had helped to considerably raise the profile of music in games.  Yes, by the early 90’s, any beat’em’up worth its’ salt had a decent line in digital ‘aaaHHHHHs’ slaps and ‘EUARRGGGHs.’ I struggle to think, however, of a pre-Toejam & Earl console title that had digital samples embedded in its DNA as firmly as Sega’s alien-based adventure.

In Toejam & Earl, you see, digital samples are everywhere. From the more hard-hitting of the drum patches, to the laugh of a maniacal dentist, to the title characters’ snores, yelps and excited exclamations of ‘yeah, alright!’ there’s almost too many to list. In fact, there’s even a sample of a stretch of the hallelujah chorus. Its bonkers. When you consider the amount of cartridge space all of these samples must have taken up, this can hardly have been an accident either.

This wide use of digital samples does make perfect sense, however. From a creative point of view, the main characters themselves are a gentle Hip-Hop parody, so music and sound would inevitably have been a defining part of their characteristics.

However, when you consider the limited sprite sizes and animation frames imposed by the style of game, it’s quite obvious that sound design was a clever and effective way for the developers to not only flesh-out the heroes, but the villains, side characters  and world in general.

Indeed, sound is so integral it’s actually built into some of the fundamental gameplay mechanics: Telephones are important helper when it comes to fleshing out the in-game map, for example, but you’d struggle to find them if you couldn’t physically hear the ring.

Sound is so important, then, that it isn’t surprising the game features something more exciting than a simple sound test: the  ‘jam out’ mode  allows the player to muck around with game’s vast array of samples against a cool psychedelic backdrop. It’s an incredibly cool feature to have included, and off the top of my head I really can’t think of a comparably nifty sound test on the Megadrive. 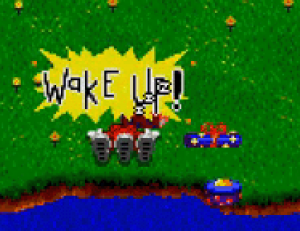 The graphic is animated nicely enough, but ‘WAKE UP’ wouldn’t have the impact without the sample

Whichever way you spin it then, there’s definitely a case for Toejam & Earl to sit near the top of the videogame soundtrack tree. Whether you’re looking for a soundtrack that made tremendous use of the hardware, a d that questioned where the soundtrack’s place should be in general game design, or simply a soundtrack to tap your foot too, Toejam & Earl has something for everyone. Perhaps I’m biased, but I would vote for it any day of the week.