Crikey! It’s already been a year since i bought my first Everdrive. Lets have a look at it, shall we?

For those not in the know, an Everdrive is an ingenious invention. While your average cartridge game contains a simple PCB containing a read-only ROM, an Everdrive contains a rewritable ROM and circuitry so that it can access an Attached SD card. 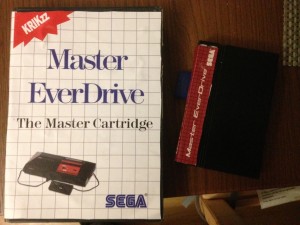 Here’s my everdrive in all its glory. World Cup Italia ’90 died so it might live…

In a nutshell, this means you can load an entire console’s library onto an SD card, and use the Everdrive to play each and every game as if they were running from an original cartridge. Cor!

Now, from a moral perspective I appreciate that we are on pretty shaky ground. After all, only a few will use a device like an Everdrive for homebrews. Old (but still copyrighted) commercial games are realistically the main attraction of such a thing.

Now with that said, I think there’s a couple of important points that are worth bearing in mind. The first important one is that the companies in question have abandoned the original hardware. You might be able to buy inferior emulated versions on Steam or the Virtual console, but console manufacturers give us no legal way of format-shifting these onto our original hardware, which is by far the most optimal way to play.

On top of this, the market for original games is hardly ethically pure. If you pay over £100 for a rare title in the secondhand market, none of the proceeds go to the original developer and none of the details of the sale will be officially tracked. The only person being helped by your purchase is the seller in question (and all the other dealers who are assisted by having insanely inflated prices.) 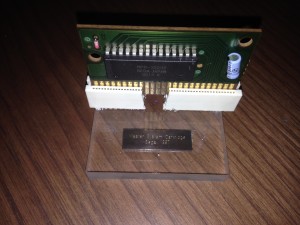 …though i made good use of the pcb afterwards. It now lives on as a desk ornament!

Consequently, I’d argue that Everdrives are at worst a morally neutral thing. They aren’t really hurting the bottom line of any games publishers (especially if you still continue to buy cheap digital retro rereleases for play on the go etc) and they offer an alternative to paying silly prices to those of us whose main interest is playing games rather than collecting them (not that there’s anything wrong with collecting, of course!)

With the thorny issue of piracy put to one side then, I can tell you about my initial reason for buying an Everdrive: the Sega SG-1000. You see, inside of every Western Master System, there’s actually a hidden SG-1000 waiting to get out.

In Japan, the story of Sega’s entry into the home market actually began in 1983 rather than 1986. Tragically released on the same day as Nintendo’s Famicom, the SG-1000 was a machine designed with the second generation console market in mind. Unfortunatly, while this meant it was a cut above the likes of the Atari VCS and the Intellivision, the SG simply wasn’t cut out for the quantum leap offered by Nintendo’s box of tricks and suffered greatly as a result. 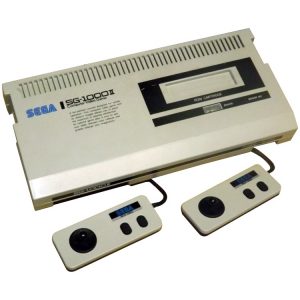 Sega weren’t ones to give up without a fight mind you, and a slightly upgraded SG followed (the MKII) as did a computerised variant which actually saw a limited Western release (the SC-3000.) None of these updates managed to help the platform gain much traction however, which was why Sega were relatively unkown before the arrival of the mighty Master System. Thankfully the Master System (Which was understandably known as the Mark III in Japan) was actually just a beefed-up SG internally, so it maintained full backwards compatability with the original machine even when it moved Westwards in a fancy new exterior package.

Sg-1000 Exerion. You must overcome your travel sickness before doing battle with the enemy…

Playing SG carts today is a bit of a tricky one. Though physically the same as MKiii carts (which is helpful), the pinouts on the Mkiii are different to those of a western Master System (which isn’t.) You can get around this by wiring your own gender changer for the Master System’s expansion port, but Sega (ambitiously) decided to region-lock SG the carts to Japanese BIOSs –  so you’d have to open up your Master System and swap that over too.

It might seem easier to just import a system fron Japan, but there isn’t an easy way to do that either – at least not without paying hundreds of pounds. And that’s without even getting into the rarity and price of many of the games.

Consequently, the SG-1000 library is a good candidate for accessing via an Everdrive. The big question, however, is would you want to? On that account, the SG-1000 is a bit of an oddball. Released before Sega really had much of a home strategy, a large chunk of its titles are made up of ports of multi-platform titles and ports of Sega’s arcade games…which generally ended up on other platforms as well!

It’s not the most detailed racer in the world, but a First person racer was pretty ballsy stuff. And that’s without the trac editor…

While that may not seem a great start, its worth noting that many of these titles aren’t the usual ones you’ve played on your Master System and Megadrive. In fact, one of the interesting things about the SG library is the way it highlights just how many interesting arcade titles Sega had in their repertoire even before they really hit in their stride.

From the fun top down racer Monaco GP (A game old enough to predate  arcade CPUs) through to novel multi-ship scroll shooter Star Jacker, it’s clear that Sega were always able to come up with interesting takes on existing gameplay models – even if they couldn’t be said to be leading the pack during this era.

Along with the early arcade games, its worth noting that some of Sega’s later titles also showed up on the machine to. If your a fan of retro demakes and have ever wondered how the likes of  Super Hang-On and Wonderboy would have played on an Intellivision, well the SG-1000 ports of these titles might have give you a bit of a clue.

On top of that, it’s also worth noting that the SG-1000 library does include some notable and less-common  third-party titles as well. Jaleco’s Exerion, a cross between Space Invaders and a bad case of travel sickness, only appeared elsewhere on the NES and MSX range of computers. The SG version happens to be a really good one, too.

There’s more to this pacman clone than meets the eye

That’s not to say the system was without exclusives mind you – Sega came up with a number of bonafide originals for the SG-1000 as well. Though the most notable is perhaps Yuji Naka’s debut Girl’s Garden (an adventure game that involves helping a young girl gather flowers while avoiding being mauled to death by angry bears) there are a few notable oddities.

Pacar, for example, is an interesting vehicular take on Pacman that seems to have been designed to remind people of the debt owed by Namco’s famous dot muncher to obscure Sega classic Head-On. Racing sim GP World, meanwhile, was an early example of an ambitious first-person racing game –  and one that even managed to contain its own track editor to boot. Blimey!

Next to these, Sega even had some licensed titles. Orgus (predecessor of Master System Transbot) and Golgo-13 (a light gun free shooting game) were both quite good fun and based on popular Animes of the time.

Despite effectively being no more than an historical footnote then, the SG-1000 is actually quite an interesting bit of kit. Though few aspects either of the hardware or the software stand out as being timelessly important, the console spent its entire lifespan in the bridge between the second and third console generations – making it a living document of the changes that were taking place in the industry during that period. Though it may not have any of standout timeless classics that can be found on the Master System or Megadrive, its library holds enough curiosities to make it worth a second look.

Before I go, here’s a final thought about Everdrives: the above article would have been very difficult to write without access to one (or some other equally illegal form of emulation.) Though it may have been possible for me to secure a Mark III or SG-1000 at great expense, I doubt i would have been able to secure enough of the less common games to have enough context to write an overview. At a time when so many of our contemporary games are being written to depend on private servers, I think the realities surrounding video game archival is something we need to ponder.