Well, in case you haven’t noticed, there’s nothing I like more than tinkering with things around here –  and up until today the store was a bit of a bug bear. Not only did I have the vague intention of introducing Paypal integration at some point, but I also wanted to create a store which was a better fit for the general styling of this place. Oh and I also wanted to make it a bit easier for you to buy stuff to boot!

With all of those things neatly plonked together than, i’d like to introduce the new FatNicK store powered by Gumroad!

Brainchild of one of the first designers at Pinterest, Gumroad are an e-commerce company whose whole approach is about being swift and light-weight while maintaining complete security.

Consequently, this means you can now buy any FatNicK release you with just a couple of clicks, and be safe in the knowledge that the whole thing’s being handled by a company who take care of 20,000 content creators across the globe.

Don’t take my word for it though…head over to the store now! If you see anything you like, for a limited time the offer code begoro will get you 10% off anything! Hurrah! 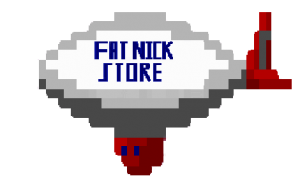 Bah. Sorry for the commercial break. I’ll be back with new music soon!