If you’ve found your way to this article, I probably don’t need to tell you that online gaming discussion gets a bit of a bad press. From the constant harassment of developers over minor gameplay tweaks through to the vitriol aimed at women, there’s a lot of bad stuff out there.

Reflecting, I wondered had things always been this bad? I don’t remember the internet being quite so callous in the days when the Xbox and PS2 ruled the roost. Has the internet changed, or was i looking through a severe case of rose tinted spectacles?

In fact, ignore the Xbox and PS2 – wouldn’t it have been brilliant if internet had been widespread back in the days when the hot playground topic was the Megadrive vs the SNES. I wonder how heated those discussions would have been. It’s such a shame that no one really had the internet back then.

Ok, so while few folks used anything approaching the internet as we know it today, people had actually been posting messages to Usenet groups since the early 1980s. If you’ve never encountered it, Usenet is/was an ambitious non-centralised computer network that was set up by a couple of graduate students in 1980. Users connecting to the network (via good old fashioned dial up modems) were able to post messages which would then be shared to others via a group of connected servers. These messages were posted into subject-based categories known as Newsgroups, making for an network that was akin to one massive web forum – albeit one without any centralised administration. 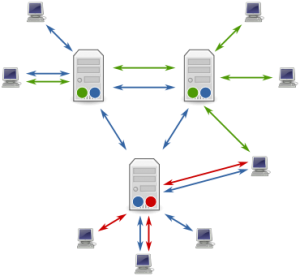 Back in 2001, Google bought the only company who had been trying to build a comprehensive archive of Usenet posts and, with the help of some academic contributers, they’ve managed to build an archive that extends all the way back to 1981. It’s not a perfect or a complete archive – and Google have come under fire for the poor quality of the archive’s search engine – but a quick poke around can recover some wonderful historical artefacts: from a vague early announcement of the cartridge lock-on technology used in Sonic & Knuckles, right through to the collapse of the Berlin wall. Blimey. 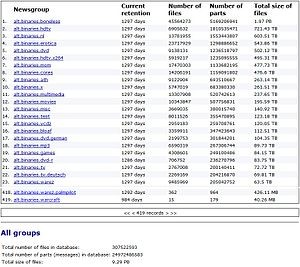 History lesson aside, what can these long-forgotten Usenet discussions tell us about video games?

Well, When we look at language and attitudes of the messages things become very interesting indeed. Reading messages back today, ’90s usenet feels like a very formal and stuffy place to be in comparison with our contemporary online institutions.

Indeed, even when people were getting a bit snarky on Usenet, their tone was generally polite and the posts they created were often detailed and informative: in a reply to a post about the strength of the Amstrad CPC compared to the Commodore 64, for example, an exasperated James Compton wrote:

Oh, God, here we go again with the Z80 vs. 6510 debate. It has been well
established (reference: recent 64 vs. Spectrum thread) that a 1 Mhz 6510
is very much in line performance-wise with a 3.5 Mhz Z80. The Z80 by and
large requires more cycles per instruction and more cycles per real-world
operation than a 6510, so the Mhz difference is a compensator, not a
real-world 4X speedup.

Indeed, repeat questions seem to have been a bit of an issue in Usenet world (as they still are today, in fact.) In 1991, the question of Megadrive or SNES was a popular one on rec.games.video – but Silicon Graphic’s Michael Portuesi still had some warm advice for fellow user Kaho Chan when responding to the question about which console to plump for:

>Anyway… I am kind of leaning towards a Genesis.
> But, any suggestions are needed!

Go play some games on both machines. Buy the system that you are most happy with and has the games you like best. Neither Nintendo or Sega is going to go out of business tomorrow, so there are going to be lots of new titles available for both machines in the future. 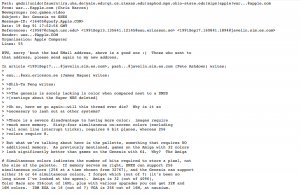 This wasn’t a fluke either – four years later, rec.games.video.sega was awash with speculation over which would be the best 32-bit system to buy. While normally we’d expert such discussions to swiftly become rather grumpy, the discussion remained civil throughout. In response to a claim that the Playstation would be the superior console, for example, Christopher Mermagen simply explained.

The playstation, from what I’ve seen, does appear to have superior graphics initially, but from what I’ve heard, the Saturn has been further studiedand better games graphically are on the way.

Such good behaviour wasn’t just found in one news group either. Though the rivalry between Amiga owners and 16-bit console gamers could become just as heated as Megadrive vs Snes discussions, You wouldn’t know it from looking at rec.games.video. In this post from September 1991, Chris Warren waded in to an in-depth discussion about the relative strengths of the three machines in order to provide some useful information about colour palettes:

# Simultaneous colors indicates the number of bits required to store a pixel, notthe size of the palette. If memory serves me right, SNES can support 256simultaneous colors (256 at a time chosen from 32767), and the Genesis can supporteither 16 or 64 simultaneous colors, I forget which (out of ?) (it’s been solong since I’ve looked at the specs). Amiga is 32 (out of 4096),Color Macs are 256(out of 16M), plus with various upgrades you can get 32K and16M colors. IBM EGA is 16 (out of ?) VGA is 256 out of 16M, at nausium.As mentioned in a previous post, the Amiga also looks better ’cause it hasmore scan lines and more horizontal pixals that NTSC based video displays.

As refreshing as it is to see online games-related dialogue that doesn’t feature crude sexual references, death threats and police SWAT teams being deployed, what kind of conclusions can we realistically reach from all of this? If there’s one aspect of the Usenet archives which demonstrates how different the online world of the early nineties is from today, it’s the the relative lax approach to protecting personal freedom. Yes, the free giving of email addresses was necessitated by the system itself to an extent, but you don’t have to look very far to see people going further than this – even to the point of including  personal mailing addresses in signatures (heh, no – i’m not going to include any examples of that here)

Indeed, one thing that quickly becomes apparent is the extent to which the past is a radically different country. Today, the (mainly American) narrative of the 8/16 bit generation is so solidly ingrained that we forget that the year 1993 looks very different when viewed forward  from the past than it does when look back at it from the future. On the 24th of October 1991, for example. user Kaho Chan posted some interesting speculation about Atari’s next move:

I am hearing that ATARI had developed a 32-bit game machine but it was ahead
of schedule so they decided to scrap it and work on a 64-bit machine!?

I also heard that if ATARI’s 32-bitter came out when SNES came out, it’d have
killed it?!

Of course, we know now that the Jaguar was (and realistically could only ever be) a bit of a flop, but It’s always worth remembering that this inevitability wasn’t necessarily apparent at the time.

These fundamental difference makes it difficult to draw solid conclusions about the overall balance of behaviour. Yes, the internet of the ’90s seems much more pleasant, but it’s worth remembering that we’re not really comparing like-to-like. First, there’s the difference in population. A brief examination of email addresses reveals an abundance of individuals linked to academic institutions and tech companies, so we’re hardly seeing the kind of stratified sample that would be found through an examination of tweets today. It’s definitely worth remembering that any bad behaviour seen today is an important side effect of the internet being so open, available and democratic,

On top of that, we’re also arguably looking at the genesis of a new style of writing. It’s worth remembering that not only was the world of Usenet a world before the internet, it was also a world before the mass acceptance of other instant forms of written communication, such as SMS. While Newsgroup discussions may seem seem stuffy in comparison to modern online communication,  formal letters were probably the only model many of the contributors had for communicating with strangers. Back then, people simply wouldn’t have been as automatically familiar with each other as we are with each other as we are today – human communication has fundamentally changed across the entire spectrum. Both for better and for worse.

Overall then, things probably aren’t quite so different as they may at first appear. Indeed, though you can expose yourself to a lot of vileness by poking around the open networks of Facebook and Twitter, we should never forget that there will always be communities like skirmishfrogs.com that will always be full of friendly, insightful and respectful people.

I would say that if we’re going to take something away from all of this, it might be that instant familiarity isn’t always a good thing. I don’t doubt that there were probably some terrible people trawling the Usenet groups of the 1990s, but i think there activities were probably hindered by a general air of politeness. Instant familiarity might be fun, but If you want to reply to a stranger, a little politeness might go a long way – especially when you consider how easy it is for your intentions to be misconstrued in 150 characters.

Usenet posts can be explored within Google Groups: here.

Psst! Do you like music? My new single is available on Spotify and all other decent online music services!